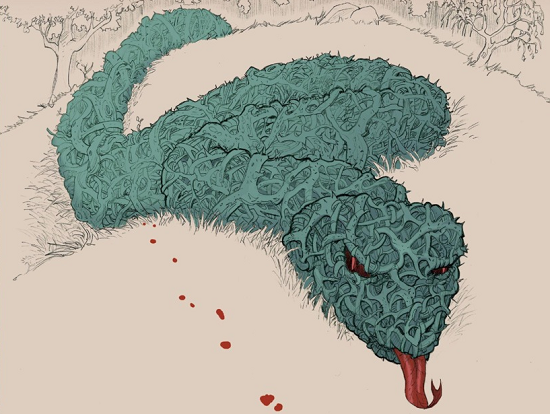 With his next issue due out on January 1, Terry Moore's Rachel Rising left 2013 on a bit more of a calm note than some of the bloody, explosion-fueled mayhem that's taken the town of Manson in recent months...although not by much.

A character-driven issue, we see what looks to be Zoe's final appearance on the page for a while as Rachel and Jet deal with the apparent death of Aunt Johnny in the only way you'd expect them to--by calling Dr. Siemen to insist he resurrect her. 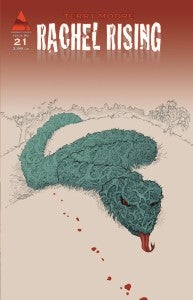 Series creator Terry Moore joined ComicBook.com to talk about the issue and, briefly, to update us on the status of the Rachel Rising TV series--which he says he should know more about by the end of the year.

So when #22 comes to press on January 1, we'll be asking him a follow-up, surely.

Spoilers ahead, as usual. If you haven't read the issue yet (and really--why wouldn't you have?), please do pick it up on ComiXology, where Moore's Eisner-winning series Strangers in Paradise is also 50% off all weekend long. If you haven't read that, you really, really should. It's a staggeringly brilliant work.

ComicBook.com: The bird frozen to the tree in the snow is a great, creepy visual. Is that something that you're aware of happening in the world or just something that occurred to you?

Terry Moore: It's a snapshot of what's happening all over town in Manson. A heartless freeze.

ComicBook.com: Dr. Siemen seems very...well, normal...in this issue. I always kind of took him as insane becuase of the mummified body in his house and all. Has his character evolved in your head or just what you've shown us?

Moore: I never see it as either or. A lot of people seem normal in social settings and work, but are later revealed to have a surprising quirk in their private life. Isn't that fascinating? So where is the insane line drawn? Many insane people have be highly functional and pleasant company to boot. 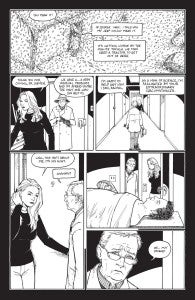 ComicBook.com: For some reason, I took Johnny and Carol to be married, or at least partners. "Friend" was surprising. How do you decide on terminology in a case like that?

Moore: My experience has been that more mature people aka older, are a bit more discreet, for a lifetime of reasons. They are still brave, bold and can be bluntly honest, but they're also sometimes more discreet than the younger generation. People my age (over 40) grew up hearing the term "friend". "Partner" is a relatively new word. In Johnny's case, since she and Carol weren't known as a long-standing couple in town, I think Johnny would go with "my friend" when talking to her niece. Did you catch that Rachel just smiled past that vagueness and insisted she call the woman who loved her? I'm trying to show two generations talking to each other. I'm sure in the future, when the boomers are gone, this will be a thing of the past.

ComicBook.com: In a book that deals so much in reincarnation and nearly-immortal character, I can't help but ask: Did Da Vinci LITERALLY teach Dr. Siemen?

Moore: Did you see that monk by Sleeping Beauty's side? Who did he look like to you? Why did Dr Siemen know the truth about such an old occurrence? Hmm. I say, HMMMMMMMM!

ComicBook.com: I like the fact that he feels obliged to scientifically explain how Rachel managed to get up and walk after being killed AGAIN.

Moore: Athletes walk it off, doctors talk it out, cartoonists take a nap.

ComicBook.com: You did a great job transitioning the dog from vicious to pathetic. It is tough to get a range of emotion out of animals, since you don't draw them as much? 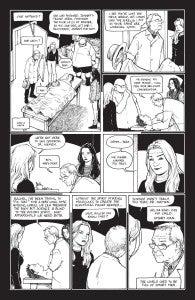 Moore: I think I drew enough animals in my cartoon days that it's not a problem today. I used to be into Disney and all that so, a lot of animals. And again, the key to expressions on animals or people is to learn it in cartoon mode first, then apply your chops to more realistic version. It works. Realistic anatomy lessons aren't worth shit for helping you draw realistic body language and emotion. You'll learn it in a week of cartooning though.

ComicBook.com: I think that "honk" may be my favorite-ever piece of your lettering.

ComicBook.com: So is Zoe headed out of town at this point, or is she tied to Manson and we're just seeing the next stage in her journey?

Moore: She's going to Gotham City. Rumor has it you can kill all you want there and the worst they'll do is put you in an asylum that can't hold you.

ComicBook.com: This was a pretty straightforward issue from a commentary standpoint. Can you tease a little of what we can expect in the next issue?

ComicBook.com: Any change in the status of the TV series? It seems like every time you look up nowadays some comic book is being optioned!

Moore: Yeah, I agree. But it's not every comic, just certain types of comics. I should know something by the end of the year.