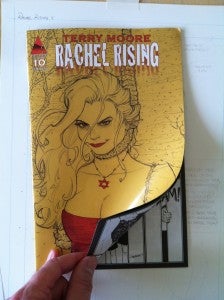 #10, out Wednesday, features a grinning woman on the cover, wearing a star of David necklace and being hanged with a noose. Shortly after the cover initially went online for solicitation purposes, writer/artist Terry Moore was reportedly reached out to by  someone who was concerned that the cover may be perceived as racially insensitive. Moore talked to the man, explained the overall story of the series and reassured him that there was no racist intent or even racial connotations to the image. Before the book is released this week, though, and there's the inevitable wave of people who take to the Internet to say, "You know what I saw in my shop yesterday?", it seems it might be instructive to reprint some of Moore's comments on the cover, from a blog post he made on August 3 and follow-up comments in the thread beneath and a subsequent post. Oh, and as a bonus? He discusses elements of the plot below that I haven't seen circulated elsewhere.

This cover art has been on the web for all the world to see for months. It has received a lot of positive responses. Actually, all positive responses, except one. One gentleman suggested the image could be racially offensive, because it depicts a noose. As you can imagine, I was very concerned about his opinion. We exchanged emails. I told him there were no elements of racism in Rachel Rising. This story is about one thing, the 16th century witch trials. They hanged women for witchcraft back then. In Rachel Rising, the town of Manson hanged real witches who come back 300 years later for revenge. This cover depicts the execution of one of those witches. The defiant smile on her face and the symbols of witchcraft she wears all give the same message: you're making a big mistake. That's the crux of the story. But you have to read the book to find out. The gentleman admitted he hadn't read the book. I know, judging a book by its cover and all that. Still, it happens. In all fairness, he was just talking about the image or, to be more precise, the noose. So I want to reassure him, and you, this cover and this story are about the witch trials. They hanged witches back then. Please don't associate it with anything else. The French Revolution and the Spanish Inquisition hanged the accused, among other nasty forms of execution. It had nothing to do with American racism. Rachel Rising is meant to be seen the same way. So, I am running with this cover because it is integral to the story and the story has nothing to do with racism. If you want to know the truth, all my stories are about victims surviving an angry world and all my covers are about boobs. Boobs sell. And I love them.

It wasn't completely clear at this stage whether either the original e-mail or Terry's understanding of their conversation had clarified that the Star of David, a traditional symbol of the Jewish faith, might be at issue on the cover. When a fan chimed in on the comments thread to suggest this, she also proposed that maybe it isn't an issue at all, and that the woman on the cover may just have been a Jewish witch, like Willow Rosenberg from Buffy the Vampire Slayer. Moore agreed that this may be the case, while admitting it was not his intent:

I too am confused by the fact that I drew a Star of David instead of a pentagram. I've always had a form of dyslexia where I easily confuse two similar options—such as names, faces, symbols—but this is ridiculous! I'll fix this before the final print, but you make a good point. Why not a Jewish witch? If witchcraft is only possible in the anglican community, that wouldn't fit with the whole earth mother thing. It can't belong to one group. I do recall the apostles encountering a witch in the New Testament (in Acts), walking behind them yelling curses. Although a woman yelling curses at you is usually called something else. She may have been Jewish, considering the territory they stuck to. But the necklace on my cover is a mistake on my part. I meant to draw the pentagram. I'll fix it. Aren't you glad I don't work at a nuclear power plant?

The cover may be a mistake, but it's worth noting that the woman featured is likely Lilith, the mysterious spirit who has been wandering around Manson, causing trouble, since the first issue of the series. There's also a Lilith in Jewish mythology, which seems an odd coincidence, and one Moore may be able to turn to his advantage in the long run...!