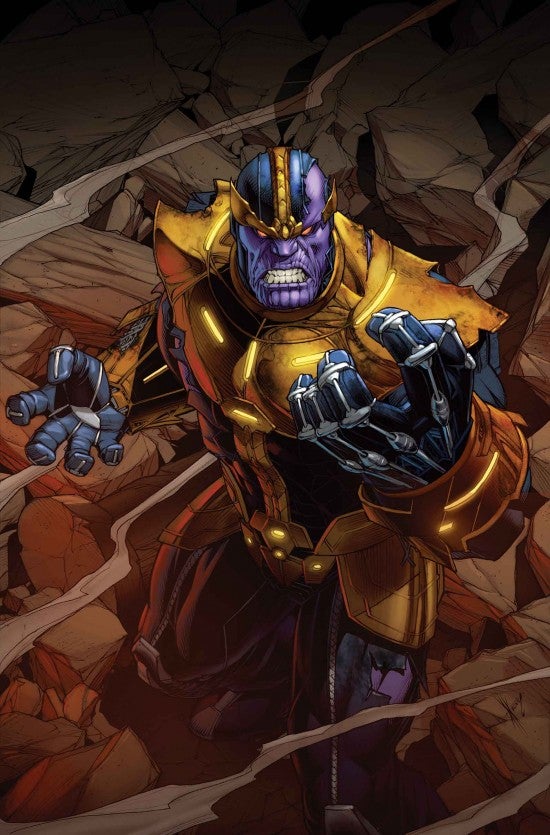 Jim Starlin and Ron Lim, the creative team behind Marvel Comics's Infinity Gauntlet and Infinity War, will reunite for this year's Thanos Annual, the publisher announced today. "Jim Starlin and Ron Lim, the team that brought you the classic Infinity Gauntlet, are reuniting in Thanos Annual to tell a brand-new story that paves the road to Starling's upcoming Thanos original graphic novel," said Marvel Editor In Chief Axel Alonso.  "If that's not essential reading in a year when Marvel Comics is bridging the gap to the cosmos, I don't know what is." By "bridging the gap to the cosmos," of course, they're talking about the upcoming film adaptation of Guardians of the Galaxy, which debuts on August 1 and for which the trailer arrived online early this morning Eastern time. In that movie, director James Gunn told us at Comic Con that Thanos will do more than just stand around and smile. You can check out the solicitation text below, and the cover above. Learn how a devastating defeat in Thanos' past sets into motion cataclysmic events that cannot be undone. Facing his own demise, Thanos welcomes the afterlife – expected to be greeted by his one true love, Death. He was wrong. At the edge of his life, Thanos is greeted by the malicious Mephisto! But Mephisto is not alone. A mysterious being waits for the Mad Titan. A mysterious being who will take him on an unparalleled journey through space and time – providing Thanos with important glimpses into his future. His greatest triumphs, and his most crushing defeats. Now, Thanos must face down Mephisto, the Avengers, and even his future self if he is to prepare for what comes next! But can he? Events set in motion in Thanos' past will have devastating consequences in August's upcoming Thanos: The Infinity Revelation original graphic novel! Don't miss one minute of the action as the legendary team that brought you Infinity Gauntlet re-teams for the THANOS ANNUAL this May! THANOS ANNUAL #1 Written by JIM STARLIN Art by RON LIM Cover by DALE KEOWN Variant Covers by JIM STARLIN & RON LIM On-Sale This May!

Naruto: Sasuke Repeats Anime History with His Latest Save