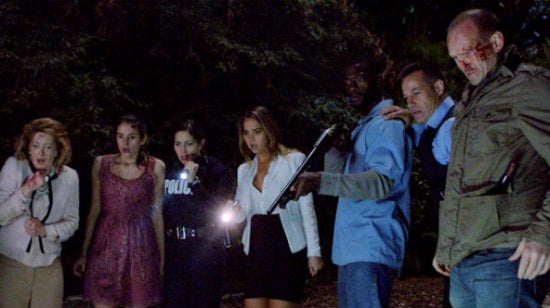 Amazon has announced that the "The After" is one of six pilots picked to be the next Amazon Original Series as part of Amazon's Prime Instant Video service. "The After" is created by Chris Carter, creator of "The X-Files." The hour-long drama series follows eight strangers who are thrown together by mysterious forces and must help each other survive in a violent world that defies explanation. Aldis Hodge, Andrew Howard, Arielle Kebbel, Jamie Kennedy, Sharon Lawrence, Jaina Lee Ortiz, Adrian Pasdar and Louise Monot will be returning to star in the series. Other pilots picked up by Amazon include "Bosch," "Gortimer Gibbon's Life on Normal Street," "Mozart in the Jungle," "Transparent," and "Wishenpoof!" "We had a tremendous response to Amazon Studios' latest pilots—in fact, double the number of customers watched these pilots compared to our first season and they posted thousands of heartfelt reviews with pleas for us to continue these shows," said Roy Price, Director of Amazon Studios. "Now the fun really begins—Amazon will be working with some of the most talented casts and creators in the business to bring six new shows exclusively to tens of millions of Prime members worldwide. These series, along with our summer kids programming, will give customers a lot of viewing choices." The pilot episode of "The After" is still available for free at Amazon.com.