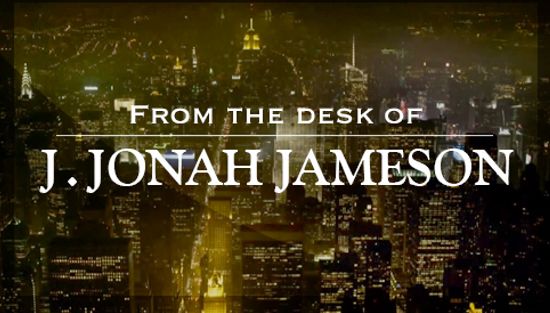 Even though J. Johan Jameson has yet to make his debut in the rebooted Spider-Man movies, he has now weighed in with his thoughts on Spider-Man, which are sort of what Spider-Man fans might expect from The Daily Bugle publisher. The viral article from Jameson is called, "Spider-Man: Threat or Menace?"

"Last night, I walked out of the 6-train at 96th Street, only to be greeted by a freshly painted graffiti tag of a large red spider painted on a wooden construction fence.

Generally, I ignore the “modern art” of the masses. I must be far too uncivilized to appreciate the subtle nuances of the work. But in this case, the meaning was not open to interpretation.

Do the young people of this city really want to turn the mysterious creature known as Spider-Man into some kind of modern-day Robin Hood?

This masked, web-slinging vigilante has refused to identify himself. He has given no public statements. He has refused to be interviewed by the police. He has repeatedly refused requests from the media, including from this paper, to provide some assurance to the people of this city that he means us no harm.

Who appointed him as the new sheriff in town? I didn’t. Did you?

What gives him the moral, much less legal, authority to decide who deserves punishment and how that punishment should be doled out?

Heroes do not need to promote their actions, but they also do not hide from the people they help. Until Spider-Man tells us more about himself, he is no hero. I dare him to prove me wrong."