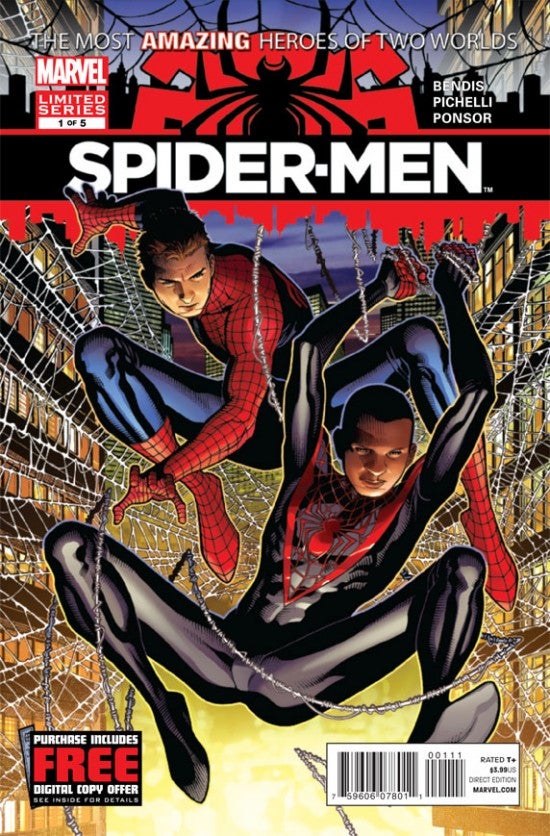 In a new interview with Comic Book Resources, The Amazing Spider-Man 2 star Andrew Garfield said that he would like to find a way for his character to "coexist, or pass the torch" to Ultimate Spider-Man Miles Morales, the mixed-race character created by Brian Michael Bendis and Mark Bagley to succeed Peter Parker after he was killed in Ultimate Spider-Man back in 2011.

Asked whether he'd given thought to the idea of Morales appearing in the ever-expanding world of Spider-Man on film (a Venom and Sinister Six movie have already been announced, and there have been hints that characters like Black Cat might be considered as well), Garfield said that he'd given it quite a bit of though, and joked with the interviewer that he would put in a request to Sony on their behalf.

"I think one of the amazing things about Spider-Man is that you don't see skin color when he's in the suit," Garfield said of the character, who traditionally has been discussed as a hero who is more relatable to the reader than most. "You don't see any religious beliefs. You don't see any denominations. Everyone can project themselves into that suit. It's incredibly powerful in that way. So of course I think it's important that the openness, the casting, in terms of who could be Spider-Man, could be absolutely anyone. A hero is a hero, whether you're a man, woman, gay, lesbian, straight, black, white or red all over -- it doesn't matter."

He added, "Miles Morales was a huge moment in this character's comic book life. And I do believe that we can do that. It's something I'm really interested in figuring out; an eloquent way of coexisting, or passing on the torch. I don't have an answer, but I think it's actually a really important move. I think it's a really beautiful and important move."

The Amazing Spider-Man 2 opens Friday in the U.S.