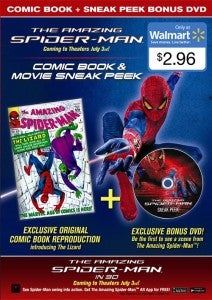 Despite in-store signage touting a "never-before-seen" scene from The Amazing Spider-Man on a DVD Wal-Mart is selling this weekend for $2.96, the exclusive home video release actually features one of the very first scenes screened at Comic-Con.

One of the earliest scenes that got people talking about Sony's reboot of the Spider-Man franchise after last year's San Diego Comic-Con panel was a sequence where the Webhead stops a car thief, mocking him along the way. Bits and pieces of the scene have been featured in trailers since then, but the scene was never seen in its totality again after San Diego.

That's the line drawn for the purposes of the much-touted Wal-Mart release, where a six-minute making-of featurette (which we'll discuss more later in the day) supports a two-minute scene from the movie that begins with a valet parking a BMW and ends with Spider-Man running from the police after they elect to pursue him instead of the car thief he's gift-wrapped for them.

It's still a great scene, and having it in commercial quality instead of whatever rate your computer is streaming it at is nice--but after having not only heard it would be an "exclusive" scene but also seeing that "never-before-seen" on signage, it seems likely that fans might be disappointed to take it home and find footage that's neither never-before-seen nor particularly exclusive.

The upside? It's only three bucks, it comes with a reprint of Amazing Spider-Man #6 (the first appearance of The Lizard), includes some nice behind-the-scenes stuff, a one-minute trailer for the movie tie-in video game, and a DVD-quality copy of the film's theatrical trailer. All in all, I'd call that a win.

The Amazing Spider-Man: "Exclusive" Wal-Mart Scene Not So Exclusive