When Peter Parker took to the Manhattan skyline again this week in The Amazing Spider-Man, after only five years off, it was clear that this was going to be a different kind of Spider-Man movie.

Frankly, Marc Webb, his approach to the film and his reputation as a filmmaker is more to my personal tastes than Sam Raimi ever was—and the movie bore that out. While it may not have been a breathtakingly awesome movie on the order of The Dark Knight or The Avengers, The Amazing Spider-Man was an entertaining flick with some really genuine moments and a few truly great story beats.

What, then were the best moments in the whole film? Well…

If there’s one major weakness in the film, it’s that The Lizard—your central antagonist, upon whom so much of the movie rests—looks frankly a little ridiculous and doesn’t really work. He isn’t scary, but he’s also not human enough to seem like he’s truly intelligent. It’s like Peter lives in this grim and gritty world, where everything is realistic until he’s fighting a guy in a seven-foot Godzilla suit.

So why does the lizard-mouse work? Because it’s grotesque, it’s unexpected, and it sets up the film’s central conflict with a start and a scare. If they’d found a way to make The Lizard that unsettling, the movie would have been that much better. 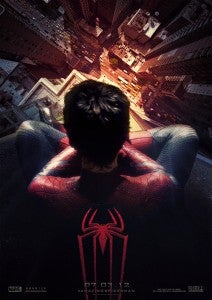 Here at ComicBook.com, we’d been predicting for some time that the collapsing rooftop assembly meant something really bad for poor Captain Stacy…and we loved it.

Don’t take this the wrong way—Leary was a pretty good Captain Stacy, and it’s not as though we were particularly glad to see him go. It’s just that they nailed the tone of his comic book death perfectly, even if some tweaks that they made along the way changed the nature of his final words.

In the comic books, of course, Captain Stacy reveals as he dies that he’d known for some time who Spider-Man was beneath the mask and asks Peter to keep Gwen safe. It’s a sacred trust that Spider-Man takes very seriously…except that, of course, he can’t actually keep the promise in the end.

In the film, there’s a similar dynamic that’s necessarily altered by the fact that Stacy had already unmasked Peter in a previous scene. There’s no question, by the time he dies, that of course he knows who Peter is. So instead of “I know who you are, please take care of my daughter,” he says that he understands Peter’s a good man, and that as a good man, he wants Peter’s word that he’ll keep Gwen out of the dangerous, violent life that he’s chosen for himself. It’s a bit of a callback, frankly, to Gwen’s earlier comment about her father’s own lifestyle and the way it affected her.

In the end, of course, Peter promises to stay away from Gwen, to keep her safe. It’s a sacred trust that Spider-Man takes very seriously…except that, of course, he can’t actually keep the promise in the end. 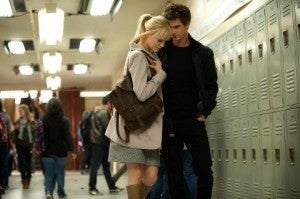 “You’re sure about that?”

The heart and soul of this movie was the relationship between Peter Parker and Gwen Stacy. Whenever the two were apart for too long, the film felt a bit listless, as though the central dynamic was missing and nothing else was totally on-target.

And the cutest moment of the film, as far as I’m concerned, was their little passive-aggressive banter in Dr. Connors’ lab at Oscorp. Peter, having infiltrated a group of interns in the hope of getting closer to Dr. Connors, impresses the scientist enough that Connors asks who he is. Gwen explains that he’s quite smart—second in his class, in fact.

“You sure about that?” Peter asks.

“Pretty sure,” Gwen responds, and the quiet sarcasm that Emma Stone brings so ably to her comic roles really sells it.

Spider-Man saves a young boy from certain death as his father’s vehicle first careens off the bridge during an attack by The Lizard and then catches fire when the gas tank begins leaking. Engulfed in flames and dangling by a thread, the boy is paralyzed by fear and doesn’t want to move toward safety.

Thinking on his feet, Spider-Man gives the boy his mask and tells him, “Put it on. The mask will make you strong,” and the little boy does.

This scene was the one that really sold me on the movie; when it hit the Internet as an expanded preview, I remember watching it and saying, “This is what a superhero movie should be. He’s inspirational, he makes the world around him better and gives people something to reach for.”

I stand by that assessment, and having seen the film in context, it’s EVEN MORE TRUE. Why?

…Because of this, that’s why. Having saved the boy on the bridge, we later discover that his father is a key player in Spider-Man eventually saving the day.

This movie is a rumination on fatherhood—Peter’s father abandons him and his father figure is taken from him. Later, his girlfriend’s dad—a good father, even if he’s kind of a pain in the butt—is taken as well. Peter spends the whole movie learning about his father’s deceptions and half-truths, to the point where it’s pretty clear he was never told the whole truth about much of anything when his parents were alive.

And, of course, there’s the fact that Peter’s emotional volatility and immaturity is at least partially to blame for the death of his beloved Uncle Ben.

But here, it’s the opposite. Peter is mature, he’s stable, he’s cool, and he does what he needs to do. A son lives, a father rejoices and in the end, that father brings resources to bear and lines up construction cranes all through the city, giving Spider-Man a clear path to Oscorp Tower, where he arrives in time to save Gwen and the day.