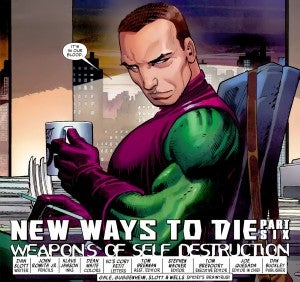 Spoilers ahead for The Amazing Spider-Man #698.

We recently pointed out that there's a shadowy figure in a hat, hiding in the background of The Amazing Spider-Man #700.

This, of course, evokes the shadowy figure in a similar hat who came to visit The Lizard in his prison cell at the end of The Amazing Spider-Man (the movie version) over the summer. Many fans assumed at the time that the shadowy figure was Norman Osborn, the owner of Oscorp and sometime Green Goblin. Filmmakers have poo-pooed this theory, but some fans are still fond of it, as it was the first and arguably most obvious theory as to who the man might be.

Well, we don't know about the movie -- and the shadowy figure there in the background is almost certainly not Osborn -- but what of ol' Norman? After a long period of being out of play, he recently (apparently) came out of a coma and re-entered the game.

It seems to us  he could actually be key to defeating Dr. Octopus, the major antagonist in Peter Parker's last go-'round as Spider-Man (for the time being).

Over the years, fans have debated which of the two is a more formidable spider-rogue. After all, Batman has The Joker, Superman has Lex Luthor, Captain America has the Red Skull, Thor has Loki and so on. Spider-Man defies this expectation by having a sprawling rogues' gallery, none of whom is necessarily the obvious choice to be his opposite number. Green Goblin is the choice of many, thanks in no small part to the Raimi movies, but certainly the fact that Norman has been dead for a healthy chunk of his publication history has to come into that equation. He's a man with something to prove.

And of course, part of the reason that anyone would reasonably consider a guy who's spent so much time as worm food being Peter's arch-nemesis is that he's the one responsible for the death of Gwen Stacy, while Doctor Octopus is the one who put a pin in her father. Both of these characters appear in Peter's "heaven," and while Gwen is as obvious as Uncle Ben and Peter's parents, her father, neither as relevant to Pete personally as those others nor as recent as folks like Silver Sable and the Rhino, is a touch out of place there. Certainly not enough to warrant any conspiracy theories, but juxtaposing the most heinous acts of the two villains in one panel is interesting if you're setting up a conflict between the two.

Of course, who knows? He could also be the one who enabled Doc Ock to do...whatever it is that he's done, exactly, which we're hoping will be clarified soon so that we can make more educated guesses as to the ending!