Ok, so the world as we know it may or may not be ending this Friday, December 21st.  Many think the Mayans all those centuries ago were onto something and over the past couple of years we have been treated to an endless stream of speculation, films, and all manner of citizen preparation for the upcoming (maybe) apocalypse.  With that being said, it's high time to take a look at some of the more well-known comic book apocalypses.  How have other, more fictional worlds met their fates, and just how closely will this mirror our own!? 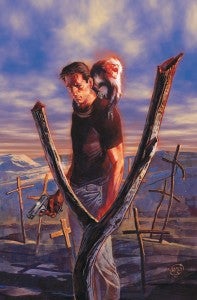 The Death of All Men in Y the Last Man: I know what some of our readers may be saying here; how can a series about a man (and one little monkey) who finds himself the last man left on a planet full of women be counted as an apocalypse?? I've always been of the school of thought that all good things come to an end, and hey, that's a LOT of pressure on one guy! Anyway, the series chronicles the struggles of the only man left, Yorick Brown, and a society where women have to pick up the pieces and make sense of the madness.  The cause of this doomsday is a plague that wipes out every being with a Y chromosome in it, naturally then all male animals. This story, which ran for 60 issues, has all the classics of the apocalypse genre: dangerous travel, shortages of food and supplies, people making desperate attempts to look out for their own best interest, and so much more!  The series is fully available in trade paperback, so check out how the world goes down and just how a society of women recovers from the loss of all the men.Truly one of the more inventive doomsdays out there! 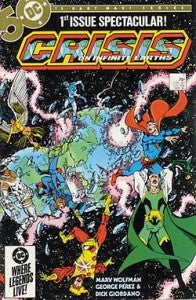 The LITERAL destruction of Earth(s) in Crisis on Infinite Earths: Considered at the time to be revolutionary in its approach to continuity revision, DC's massive limited series Crisis on Infinite Earths in 1985 was broad in its scope, yet personal in its impact. The twelve issue series attempted to condense and consolidate some of the confusing and complicated back stories for a lot of its major characters with this tale, the idea of multiple earths housing various incarnations of the DCU was clever, and then eliminating those Earths even better for many. But you can't make a continuity omelet without breaking a few Earths, so with that DC set about collapsing several of these planets, and the various inhabitants located on them, to make way for a new order.  The interplanetary carnage was unprecedented, and the deaths of several high profile heroes, namely Flash and Supergirl, was unheard of at this time.  While for many the deaths were a necessary step, DC revived the multiverse a couple of decades later and a whole new set of "Crises" were born. Let's add an honorable mention here for Final Crisis and its Anti-Life Equation! 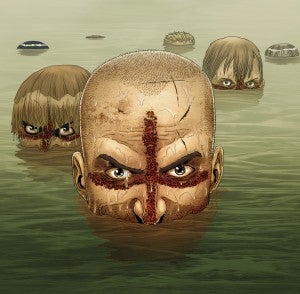 Plague of Evil Thoughts in Crossed: Many may not have read Avatar Press' ten-issue, Garth Ennis-penned series Crossed, but it's a fine example of the kind of world you WISH would go out with a whimper rather than a bang! Taking place in a world where a virus causes people to act out their absolute worst thoughts (rape, cannibalism, and murder just to name a delightful few) Crossed shows humanity at its most base form and presents a chilling picture: that we are perhaps the greatest threat to our own civilization than anything else. Like other stories about the end of the world, Crossed picks up after the events of the initial virus outbreak are over, with a small group of survivors traveling to sparsely populated Alaska in hopes of starting over. Subsequent issues and incarnations of the book appeared over the years, focusing on different characters and different parts of the United States and the world. While definitely not for the faint of heart, the book offers a chilling portrait of what happens when humans lose their self-control and act out their darkest fantasies. The human mind is perhaps the scariest weapon of all. 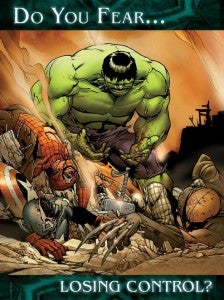 Marvel's Worldwide Fear Itself Destruction: Ok, so in fairness this one didn't technically bring about Armageddon, but close enough! No piece of the Marvel Earth appeared safe during this storyline. One of the more horrifying prospects about the end of the world is the feeling that it's actually happening in front of you, and Fear Itself communicated that presence quite well.  Using the power of an ancient Norse secret, Sin, daughter of the Red Skull, gave several already vastly powered beings of the Marvel universe mystical hammers, transforming them into "worldbreakers".  Beings such as Juggernaut, the Thing, Titania, Absorbing Man and Grey Gargoyle were suddenly powerful beyond imaginable. With rampant, global destruction, untold casualties, a Nazi war being fought in America's capital and other major cities, doomsday was certainly at hand. If not for some last minute heroics, the Earth would certainly have met its doom. While Marvel has had some major battles waged across its various planets and even Earth itself from time to time, the sheer power, destruction and all out mayhem in these pages drove the Earth to the very brink of existence. 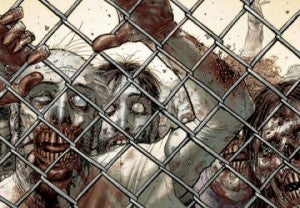 The Walking Dead's Zombie Apocalypse: Oh come now.  Did you REALLY think I would leave this one off the list? Zombies were nothing new when The Walking Dead first arrived in comic book stores in 2003, but the books caught fire, and soon a runaway hit television series evolved from the Image Comics published series. One of the more intriguing pieces of this world in which a small handful of human survivors try to outwit and stay one step ahead of the innumerable zombie hordes is just exactly how this all started. No real clue is given as to exactly how the dead began to rise and eat the living, and frankly, the tension created by series and its compelling characters makes that irrelevant. Perhaps the greatest comic about the end of the world, and specifically what happens after everything really DOES go wrong, The Walking Dead has a devoted and rabid fan base, eager to see just what might jump out, or who might get eaten next, at the turn of a page. The book is a classic study in what exactly happens to those left behind when the world as you knew it ends.