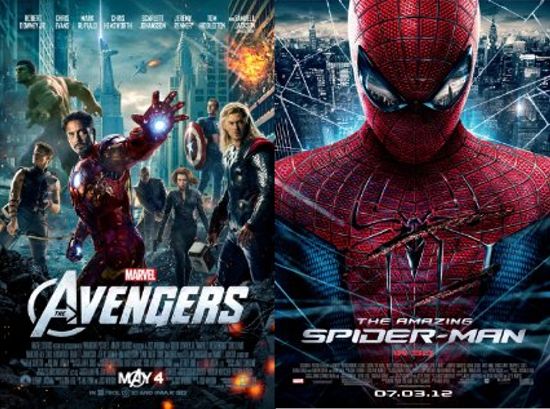 Among comic book movies, The Avengers and The Amazing Spider-Man were the big winners when it came to nominations for the 26th Annual Kids' Choice Awards. The Avengers and The Amazing Spider-Man were nominated for Favorite Movie, along with The Hunger Games and Diary of a Wimpy Kid: Dog Days. The Dark Knight Rises was not nominated for Favorite Movie, and while it might have been too intense for many kids, one of its actresses did receive a nomination in another category.

In the Favorite Female Buttkicker category,Anne Hathaway from the The Dark Knight Rises was nominated, along with Scarlett Johansson from The Avengers, Jennifer Lawrence from The Hunger Games, and Kristen Stewart from Snow White and the Huntsman. Scarlett Johansson also picked up a nomination for Favorite Movie Actress, along with Vanessa Hudgens, Jennifer Lawrence, and Kristen Stewart.

Tom Hiddleston received a nomination for Favorite Villain for his work in The Avengers. Other Favorite Villain nominees included Reed Alexander for iCarly, Simon Cowell for The X Factor, and Julia Roberts fro Mirror Mirror.

The Avengers And Amazing Spider-Man Nominated For Kids' Choice Awards