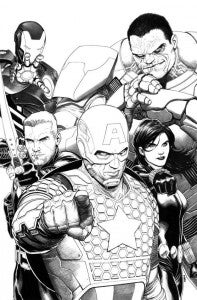 Marvel Comics has released the Steve McNiven sketch variant cover to the upcoming Avengers #1 by Jonathan Hickman and Jerome Opena.

The image, which shows the team's movie lineup (except for Thor), just a small sampling of the huge gaggle of Marvel heroes who will appear in the title, which will ship twice monthly beginning in December.

McNiven will take on the art chores for Guardians of the Galaxy, a science fiction comic written by Brian Michael Bendis and starring the next Marvel team destined for the big screen, as part of the same line-wide revamp that sees Hickman and Opena relaunch Avengers.

Check out the image at right and the solicitation information for the issue below.

The greatest heroes in comics together on one unbeatable team! Now shipping twice a month, the Avengers “go large,” expanding their roster and their sphere of influence to a global and even interplanetary level. When Captain America puts out his call – who will answer? Big threats, big ideas, big idealism – these are the Avengers NOW!