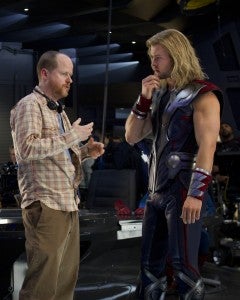 Walt Disney Studios has just shared a series of behind-the-scenes photographs from the set of Marvel's upcoming superhero blockbuster The Avengers, due in theaters May 4. In the photos, the complex and explosion-filled digital world of the comic book adaptation is stripped away, giving fans a sense of what it actually looks like to see Iron Man take off against a blue screen or director Joss Whedon standing around with Captain America's battle-damaged shield.

Whedon, in fact, gets a lot of play here, as he shows just about everyone why he makes the big bucks (and probably explains to them what it is they're supposed to be reacting to coming at them from those CG skies), hanging out on set with Nick Fury, Thor and a decidedly non-Hulk Bruce Banner.

Click on the images below to see a full-size, high-rez version.