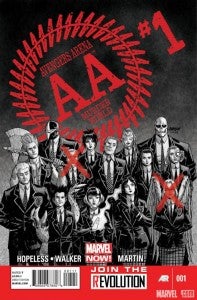 At the time, we joked that Marvel NOW!'s "survive" teaser last week felt like an ad for The Walking Dead. Little did we know that Dennis Hopeless and Kev Walker's new title had totally different pop-culture touchstones in mind. Arugably the oddest of the Marvel NOW! announcements yet to hit the Internet came today in the form of Avengers Arena, a story that follows up on Avengers Academy by taking a number of the young heroes from that series and shunting them off to Arcade's Murderworld, where they're forced to fight to the death. "We really got to cherry pick our cast," Hopeless told Marvel.com. "That was a lot of fun, almost as much fun as creating the brand new characters. I have a feeling the Braddock Academy kids in particular are going to break some hearts. Not sure if we made it clear yet, but people die in this book." He later added, "The important thing is to give each character a chance to shine. These kids were chosen carefully and with specific story beats in mind. We definitely plan on taking advantage of the broad personality spectrum we have in play. Even the characters [that] die off early make their mark on the story. I didn't throw anyone into the book as cannon fodder." As an added bonus, in case anyone hadn't made the Hunger Games/Battle Royale connection yet, the cover for the first issue, as released by Marvel earlier today, is a direct homage to Battle Royale. The other popular reference point, of course, will be Countdown: Arena, a story that DC published during its notoriously-bad Countdown to Final Crisis series. Besides the title similarity, that book also featured superheroes being forced to fight each other for a supervillain's entertainment--in that case, Monarch.