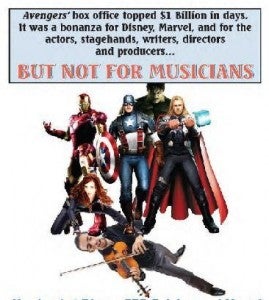 The practice allows studios to avoid covering pensions and benefits mandated by American musicians' union contracts. Those same contracts also generally allow for musicians to receive residual payments based on revenue generated by the film on home video, TV syndication and the like. Given the sizable corporate tax incentives offered to film studios in order to convince them to shoot in the U.S., part of the union's complaint was that U.S. tax dollars should not be used to subsidize a production that offshores jobs.

“The Avengers was filmed in New Mexico and Ohio, with $30 million in U.S. tax rebates," quotes a Deadline story from materials made available at the protest. "But the music was scored in Europe, hiring foreign musicians under the table and on the cheap, robbing U.S. musicians of their jobs. We don’t think that’s fair. We ask this of Disney CEO Bob Iger and Marvel head Kevin Feige: How many billions must your companies earn before Marvel will score its film music here at home?”

In addition to just complaining about The Avengers and other existing Marvel films, the union reportedly hopes that calling attention to the issue will pressure the studio to use American musicians to score Iron Man 3, currently filming in North Carolina, where they were attracted by a generous tax incentive package.

The Avengers Picketed by American Federation of Musicians