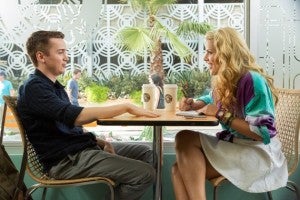 As Marvel's The Avengers, The Dark Knight Rises and The Amazing Spider-Man dominated at the box office last year, it's less and less surprising to see that popular media will reference those touchstones--but it's still cool to see the way certain shows will structure an entire episode around those running gags. Yesterday, we noted that Monday night's episode of How I Met Your Mother had a Lord of the Rings runner and that Star Wars had played a key role in the plot's development. Then last night, it was Cougar Town's turn. This time? The Avengers took the driver's seat in an episode that saw The Cul de Sac Crew cast as superheroes with arcane and absurd powers, and Travis and Laurie spending the episode on a mission to figure out what it is that Trav can do (spoiler: he eventually determined that his power "won't sell a lot of comic books"). The running joke began near the episode's opening, when Laurie described their group as "kind of like The Avengers." When Travis (an established geek within the series' canon) jumped in to suggest they could go do battle with The Chitauri, he was met with blank stares and realized he'd taken the metaphor a step too far for the rest of the group--but the "super powers" joke carried through anyway. The geeks watching also probably noticed that, in a list of "the manliest names imaginable", including football legend Joe Montana, "The Wrath of Khan" got a wink and a nod. The jokes likely came from Kevin Biegel, the series's co-creator and one of the writers. Biegel doesn't hide his comic geek credentials, having suggested shortly before the announcement of Marvel's S.H.I.E.L.D. that Joss Whedon should consider a TV series based on Peter David's Madrox miniseries. Not exactly a layman's text. You can check out the episode on the TBS website (a login to your cable provider is required) or buy it on Amazon if you're interested. The series airs Tuesdays at 10 p.m. on TBS and stars Dan Byrd, who co-starred with The Amazing Spider-Man's Emma Stone in Easy A; Busy Phillips from Freaks and Geeks and the Scream franchise's Courteney Cox.

Call of Duty: Modern Warfare 2 Has Xbox One and PS4 Players Disappointed

These 5 Netflix Originals Continue to Dominate Every Other Streamer