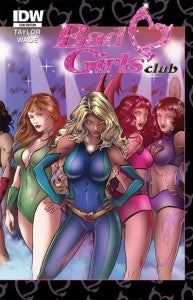 The Bad Girls Club comic book will debut at the IDW Publishing booth at the 2011 San Diego Comic-Con. The Adventures of the Bad Girls Club: An Illustrated Episode will tell the story of a new group of fictionalized Bad Girls who all possess super powers.

IDW Publishing’s booth is located in the Main Exhibit Hall, and their booth is #2643. There will also be Oxygen street teamers at Comic-Con handing out promotional materials and goodies.

The Adventures of the Bad Girls Club: An Illustrated Episode is written by Sean Taylor, pencils by Martheus Wade, colors by Studio C-10, inks by David Enebral, letters by Bob Mapplethorpe, and edited by Tom Waltz.

The Bad Girls Club Comic Book To Debut At Comic-Con