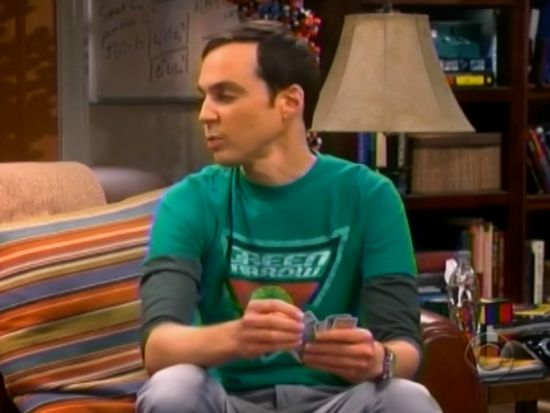 On “The Fish Guts Displacement” episode of The Big Bang Theory, there was lots of good comic book commentary, including an analysis of the Spider-Man theme song and a dig at the Daredevil movie. Usually, The Big Bang Theory cast focuses mostly on DC Comics characters, but tonight they went after Marvel.

While wearing a Green Arrow t-shirt, Sheldon Cooper asks, “Is anyone else troubled by the Spider-Man theme song?” A puzzled Leonard Hofstadter asks, “Why would it trouble you? It’s like your third favorite cartoon theme song.” Sheldon agrees and sings the “Inspector Gadget” and “Teenage Mutant Ninja Turtles” theme songs, which are his two favorites.

After the Spider-Man theme song analysis, Rajesh suggested they talk about movies that killed their franchises. Leonard says, “Like Jaws 4, Indiana Jones 4, Daredevil 1.”