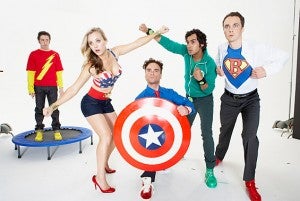 The first panels for San Diego Comic-Con International have been announced. So far, there's nothing on the convention's official site, but expect to see it soon, as a number of the television panels were announced today at TV Line earlier today. They include Arrow, The Big Bang Theory and Jon Favreau's Revolution.

Check out the schedule below to find out when and where your favorite TV shows are appearing at the convention, and keep your eyes peeled for more as they're announced!

ComicBook.com will be in San Diego this year for all five days of the biggest event of the comic book calendar, and we'll be here to bring you news from these panels and much, much more!

FRIDAY, JULY 13 The Big Bang Theory (CBS) | The Bang gets even bigger —for the first time ever in Hall H — as series stars and executive producers answer burning questions. (Hall H)

Person of Interest (CBS) | The stars and creators of this hit drama discuss Season 1 and give a sneak preview at what’s to come. (Room 6BCF)

DC Nation (Cartoon Network) | Get a sneak peek at what’s in store for this action-comedy programming block. (Room 6BCF)