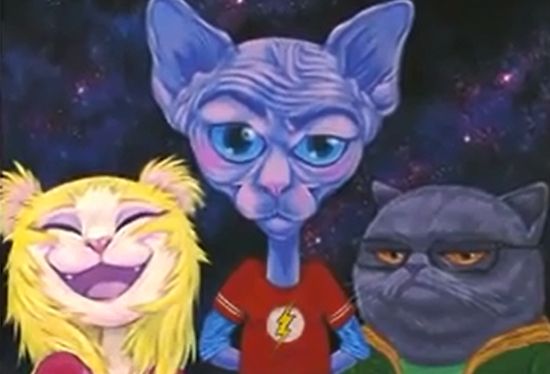 Have you ever wondered what The Big Bang Theory cast would look like as cats? Well, wonder on more, as a new CBS video shows an artist rendering of all your favorite Big Bang Theory actors and actresses as cats. The Big Bang Theory cat drawings are part of a new artist exhibit by Warner Bros and Nulceus in Alhambra, California. "I got the chance to turn all the characters on The Big Bang Theory into cats," explains artist Martin Hsu. "As soon as I found a hairless cat, the Sphynx cat, I immediately thought of Sheldon. He's like sort of an alien cat that's like visiting our world and trying to make human contact. Sheldon is exactly like that. And once that got connected, the rest just kind of created itself." Hsu continued, "The American short-tail, which is a cat that inspired Penny, it's got its beautiful coat. Lively, outgoing, they have like blonde fur, gorgeous, gorgeous cats. The cat that inspired Raj was the Bombay cat. The super-cuddly cat seems a little lost. He's got these huge eyes and seems really exotic. And he's got this gorgeous dark coat, and I really thought that it matches Raj perfectly. The cat that inspired Howard is the grooviest cat. He's quirky. He's got a sense of humor that some get and some don't. The cat that inspired Leonard could appear to be just a little moody, you know, a little mysterious, which really reminds me of the Leonard character." "The Physics of Friendship: A Tribute to The Big Bang Theory" features more than 50 works in a variety of mediums by a roster of professional artists. The art exhibit runs at Nucleus through November 10, 2013.