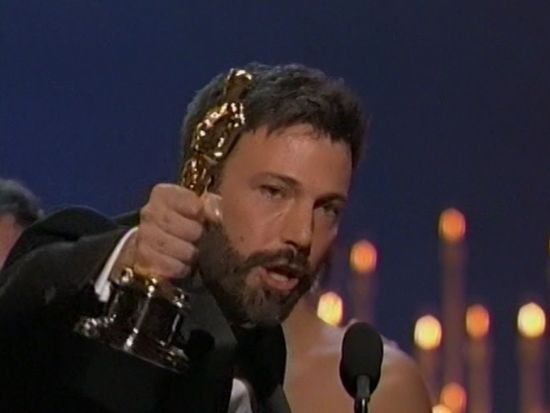 A joke The Big Bang Theory co-creator Chuck Lorre made at the Producer's Guild Awards earlier this month took on such a life of its own that Lorre felt the need to affirm for the audiences of his TV shows Mike and Molly and Mom that it was, indeed, a joke.

“Yes, I peeked. And yes, Comic-Con — he can play Batman,” Lorre said of Ben Affleck, claiming that the two had peed in adjacent stalls during a Golden Globes event the week before in the same theater. Affleck later came to the stage to thank Lorre for the, ahh, vote of confidence.

Apparently, though, Lorre doesn't like how much attention his one-liner has gotten him since, and used his trademark vanity cards, attached to the closing credits of his shows and often used to allow Lorre a public forum, to clear the air. Here's that they said:

Not that it really matters, but the joke I made at the Producers Guild Awards regarding Ben Affleck’s genitals being of sufficient size to fill the caped crusader’s codpiece was just that, a joke. I’ve never met Mr. Affleck in or out of a men’s room. Nor am I in the habit of peeking at another guy’s junk while standing at a urinal. (I mostly stare at the tiles and worry that the invisible auto-flush light beam is secretly cooking my internal organs.) I just wanted to open my speech with a cheap laugh about the Golden Globes. To be completely honest, the original version of the joke had me peeing next to and peeking at Martin Scorsese — who was, at best, a grower not a show-er. I cut it, wisely I thought, because it felt unfair to “belittle” a giant of cinema, even if I had issues with “Hugo.” I then considered telling the same joke with Harvey Weinstein as the celebrity at the neighboring stall, but cut that as well because I worried that he might be able to have me hurt. It was only when I thought of Mr. Affleck that it finally hit me. If I’m going to make up stuff about another man’s penis, why not go positive? Embellish his endowment if you will. It’s still funny. And it also allowed me to work in the Comic-Con Batman angle. Win-win right? Wrong. While the joke did score at the PGA event, it got way too much traction afterward. Which is why I now feel the need to set the record straight. You want to know if Affleck is man enough to be Bruce Wayne? Ask his wife. Or, if you’re feeling man enough, rent “Daredevil.” On Blu-ray.

You can check out both the joke and Affleck's on-stage reaction to it from later that night below, via Deadline's YouTube channel.

One Piece Creator Honed His Craft By Mimicking Disney Artwork