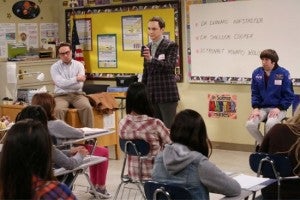 Geek favorites The Big Bang Theory and Community got hammered in the ratings last night, dipping substantially from their performances last week and hitting season lows--in Community's case, a series low--in the ratings. The Big Bang Theory still won the night, drawing 15.7 million viewers for a 4.5 rating and a 15 share in the key 18-49 demographic, but that win was barely eked out over Person of Interest, which drew 14.6 million viewers (though with a 3.3/8, it's clear their viewers skewed older). With CBS airing a number of college basketball divisional tournaments, their week's scripted programming has been haphazard and prone to being pre-empted, which could help explain The Big Bang Theory's trouble; it was down nearly 20% from last week. 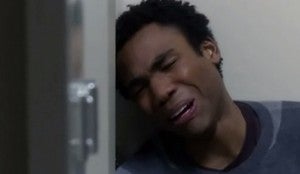 Community was hit harder, dropping about 33% to a series-low 2.61 million viewers (1.0/4). The series, which has been a critical and fan-favorite despite being on the ratings bubble almost since its inception, is looking less and less likely to return for a fifth season. Many fans thought it was over last year, but a last-minute change of showrunners earned the series a renewal. This year, though, fans and critics haven't been as generous to the series under the new management, and Chevy Chase--who has never been particularly happy on the series but who is reportedly still seen by NBC as a key selling point--walked off before filming the year's final episode. CW's on-the-bubble Beauty and the Beast starring Smallville's Kristin Kreuk, drew 1.54 million viewers with a 1.0/0.5 in the demo.