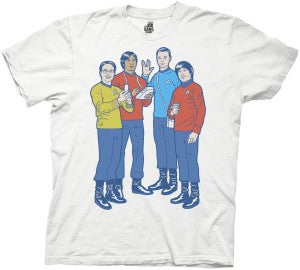 Just months after actress Kaley Cuoco starred in a Super Bowl ad with William Shatner, Warner Bros. and CBS Consumer Products are launching an exclusive, limited edition co-branded collection of The Big Bang Theory/Star Trek merchandise for the first-time ever that includes Leonard, Sheldon, Howard and Raj's preferred version of "Rock, Paper, Scissors, Lizard Spock" themed product, as well as t-shirts and Funko bobble-heads featuring characters in Starfleet uniforms. This new co-branded collection of merchandise will be available only at Hot Topic stores nationwide and HotTopic.com from now until July.  Hot Topic will also be the exclusive home to a new, limited edition The Big Bang Theory/DC Comics t-shirt, featuring Leonard, Sheldon, Howard and Raj in their favorite DC Comics Super Hero costumes. In support of the collections, Warner Bros. Consumer Products and Warner Bros. Domestic Television Distribution have teamed up with Hot Topic to celebrate The Big Bang Theory airing five nights a week in off-network syndication.  The partnership offers an "Ultimate Fan Giveaway" sweepstakes for an opportunity to attend Comic-Con in San Diego.  Fans will also have the chance to win many great prizes, including the special edition DC Comics t-shirt and $500 Hot Topic gift cards.  This year's partnership is offering an even bigger bang with a larger collection of exclusive Big Bang merchandise at Hot Topic locations nationwide. Monday, May 20, through Friday, May 31, avid fans and pop culture junkies can enter the contest either by watching The Big Bang Theory every weeknight in syndication (in select markets) and identifying Sheldon's special Hot Topic t-shirt online at www.BigBangContest.com or by visiting any Hot Topic store nationwide now through Sunday, June 2, signing up to be a HT+1 rewards member and purchasing any The Big Bang Theory t-shirt, including the exclusive "Big Bang DC Comics" Comic-Con edition t-shirt only at Hot Topic.  One lucky fan will receive an all-expenses paid, fun-filled getaway for two to Comic-Con in San Diego, CA – including two tickets to Comic-Con, round-trip airfare, three days/two nights hotel accommodations, ground transportation and special access to various events at the Warner Bros. booth. "We're excited to pay-it-forward to The Big Bang Theory's legions of fans in this perfect alliance that brings together this pop-cult favorite with the iconic brands of Star Trek and DC Comics," said Karen McTier, Executive Vice President, Domestic Licensing and Worldwide Marketing for Warner Bros. Consumer Products.  "We had such a great fan reaction and experience with this promotion last year that we're excited to team up with Hot Topic again to bring fans a bigger bang offering and more chances to win another out-of-this-world opportunity." "We are thrilled to renew our partnership with Warner Bros. on such an exciting merchandise program," said Cindy Levitt, VP and General Merchandise Manager at Hot Topic. "We feel like we've created the perfect geek storm by combining The Big Bang Theory, Star Trek, DC Comics, Comic-Con and Hot Topic in this program and promotion, and we couldn't be happier that we can make it happen for our customers." "We approach each and every initiative we endeavor from the perspective of giving back to the fans," said Lisa Gregorian, Chief Marketing Officer, Warner Bros. Television Group.  "We know that fans of The Big Bang Theory and fans of Star Trek are going to go mad for this co-branded merchandise.  We set out to deliver a truly unique co-branded opportunity and are thrilled to have gone where no man – or woman – has gone before." As part of the promotion, Hot Topic stores will also feature an exciting array of merchandise from The Big Bang Theory spanning apparel, accessories, gift and novelties, and toys, including Funko bobbleheads of fan-favorites Leonard, Sheldon and Howard in Starfleet uniforms. In addition to the trip to Comic-Con, Warner Bros. Domestic Television Distribution and Hot Topic are offering viewers in 47 markets the opportunity to also win local prize packages that include $500 gift cards from Hot Topic.

Spy x Family Cosplay Takes on a Mission With Twilight