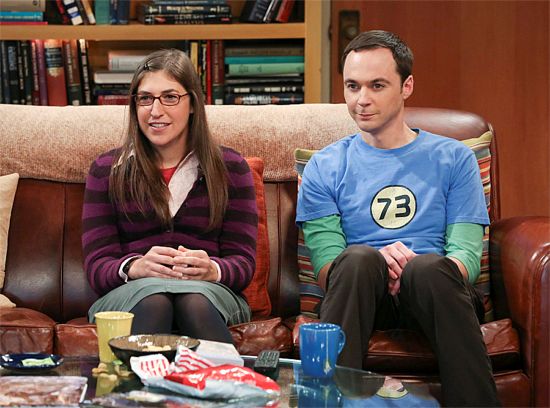 On “The Raiders Minimization” episode of The Big Bang Theory, Amy watches the Raiders of the Lost Ark for the first time. Unfortunately, she details a story problem with the movie, which upsets Sheldon. Meanwhile, Leonard is upset to learn that Penny is reading a book written by his mother.

To get Amy back, Sheldon plots to find something Amy loves and ruin it. While the couples are struggling with their problems, Raj and Stuart seek love by creating online dating profiles. Leonard and Penny are about to go out to a sports bar, but Leonard whines about not wanting to go. Penny asks if he’s still upset about his mom’s book, and Leonard pretends he is so Penny will stay home and watch The Hobbit with him.

Sheldon invites Amy to a date night to watch an episode of her favorite childhood TV show Little House on the Prairie. Howard interrupts Leonard and Penny having sex at work. After Penny leaves, Leonard explains that he’s been playing the sympathy card over his mom’s book to get Penny to do everything he wants.

Raj and Stuart launch their own dating profiles and get excited when they realize women are reading their profiles. As Amy watches Little House on the Prairie, Sheldon points out that they are eating peanut butter, before it was even invented. Amy realizes that Sheldon is mad at her and trying to get her back. Sheldon says, “Not only did you ruin Raiders for me, but you may have ruined the whole franchise, except for the fourth one, which was already bad before you got your mitts on it.”

Leonard goes to see Penny, and she’s dressed in a sexy outfit. While Leonard thinks he’s going to get more sympathy sex, Penny turns around the laptop to reveal Leonard’s mother on video chat. Leonard’s mother admonishes him for manipulating his girlfriend.

Raj and Stuart are depressed that everyone is reading their profile but no one is responding, so they go to a bar where they get rejected in person. The episode ends with the guys still trying to find an argument as to why Indiana Jones was important to the Raiders of the Lost Ark storyline.