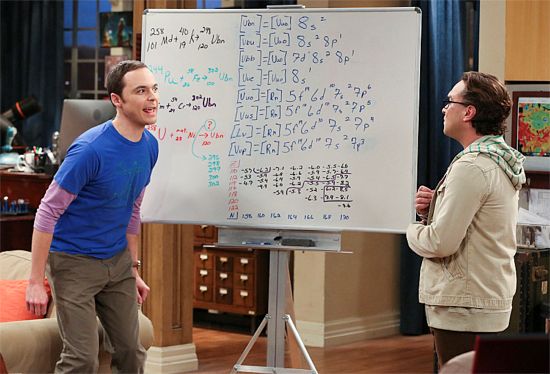 CBS has released a sneak peek clip from tonight's episode of The Big Bang Theory, which is titled "The Romance Resonance." In the clip, Sheldon is excited by a formula that's he's drawn on a white board. Leonard looks at the formula and asks if Sheldon's just figured out a method for synthesizing a new stable superheavy element. Sheldon replies, "Did I? Well, that can't be right. No one's ever done that before. Except me, because I just did it." Sheldon then dances around, repeating the phrase "Sheldon and his brain" over and over again. In "The Romance Resonance" episode, Sheldon's major scientific breakthrough makes him feel like a fraud.  Meanwhile, Howard's romantic gesture to Bernadette causes Penny to step up her game with Leonard. "The Romance Resonance" episode of The Big Bang Theory airs on Thursday, October 24, 2013 from 8:00 PM to 8:31 PM ET/PT on CBS.