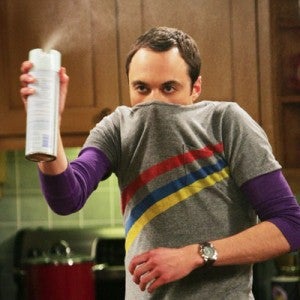 The nominations for this year's Emmy Awards were announced this morning with an expanded nomination field in several categories. Several surprises were expected in the expanded field for areas such as Outstanding Comedy, Outstanding Drama and Outstanding Lead Actor/Actress in Comedy and Drama. Fans of the show The Big Bang Theory will likely think it no surprise that Jim Parsons has received a nomination for Outstanding Lead Actor in a Comedy Series for his role as tightly wound scientist Sheldon Cooper.Parsons co-hosted the nomination announcements with Grey's Anatomy actress Chandra Wilson and when his name was called as a nominee, his response was anything but Sheldon-like, saying, "No! This is some sort of trick fest...I feel a little dreamlike right now." The Big Bang Theory is known for its frequent use of comic book, science fiction and Star Trek references, as the misadventures of a group of young geniuses and their aspiring actress next door neighbor are chronicled each week on CBS. Parsons has been a breakout star of the series for his deadpan portrayal of control freak Sheldon. The Emmy winners will be announced at a ceremony to be broadcast on CBS on September 20th. Best of luck Jim! Image by Monty Brinton/CBS