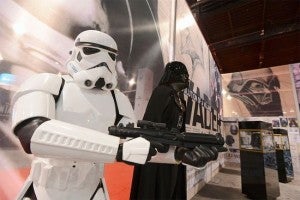 At the D23 Expo, Disney pulled off the biggest surprise ever by announcing virtually nothing new about Star Wars Episode VII. While there had been rampant speculation that D23 might bring a title or cast announcement, the entire Star Wars presentation was only around 15 minutes and a rehash of previously released information.

The biggest news was likely that Disney Chief Alan Horn dispelled rumors that the release date of Star Wars Episode VII might be delayed and reiterated that the film would be released in summer of 2015.

Other than that confirmation, Alan Horn talked about seeing Star Wars for the first time, JJ Abrams directing Star Wars Episode VII, and the importance of Kathleen Kennedy. He mentioned the Star Wars spin-off movies, but he failed to provide details on which characters they will feature.

WandaVision Finale Confirms the Darkhold Is in the MCU