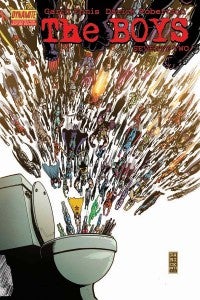 In a message posted to his personal Facebook account earlier today, Transmetropolitan and Happy co-creator Darick Robertson revealed that he's nearly finished with the final issue of The BOYS, his creator-owned series with Garth Ennis published by Dynamite. "I am finishing the final issue of 'the BOYS', issue 72 today," wrote the artist, who included a link to the song "This is the Day" by The The below the announcement. The BOYS, which began its life at DC's now-defunct WildStorm imprint, was cancelled after only six issues (reportedly due to content concerns on the part of editorial). When DC worked with the creators to find a solution that allowed the rights to revert, the pair took the seires to Dynamite, where it has been one of the publisher's most successful properties. A film version of The BOYS, thought dead since Columbia Pictures passed on it in November, is reportedly still in development at Paramount, according to director Adan McKay, who tweeted about it earlier this week. From here, Ennis will continue to work on The Shadow for Dynamite and presumably will have more creator-owned announcements coming down the pike. Robertson will draw Happy, a twisted Christmas tale he co-created with Grant Morrison, for Image Comics later this year.

The Boys Finale Already Written, Will Be Drawn Today