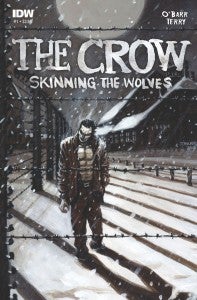 James O'Barr, who created The Crow, will return to the character with a new, time-traveling three-issue miniseries from IDW beginning in December, according to a press release from the publisher.

The spirit of vengeance will take on some of the most notorious villains of the Twentieth Century as The Crow: Skinning the Wolves takes place in a concentration camp.

"This is a story I've had planned for ages; 20 years maybe. It’s a tough tightrope to walk, using a concentration camp as a setting for a story, but I took care in not exploiting the situation for entertainment purposes. I did layouts and a rough story outline, but got sidetracked with the increasing popularity of the original film and graphic novel of The Crow and never found the time to finish it,” said O’Barr. “I met Jim Terry a few years ago and was really truly impressed with his Eisneresque style and thought it would be perfect for him. He’s gone above and beyond my expectations and I'm very proud of him and this book."

“I couldn't have asked for a better story to work on, and it has been thrilling to see it develop into what I feel will be a truly special book,” said series co-artist Jim Terry. “There are many, many titles on the stands these days, but I believe Skinning the Wolves will be different from them all--not from a place of hubris, but from genuine excitement over what it's become.”

The Crow, which kicked off  a series of sequels following its cult classic film, is currently being rebooted by producer Edward R. Pressman.

The Crow Creator James O'Barr Returns to the Series in December

My Hero Academia Cosplay Dives Into The World Heroes Mission