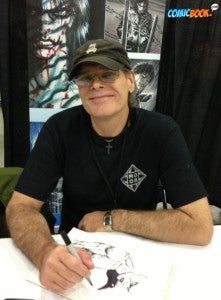 At Fandomfest this weekend in Louisville, Kentucky, Comicbook.com caught up with The Crow creator James O’Barr to get a status update on The Crow reboot. After years of being stuck in limbo, things started moving forward again with The Crow reboot after Javier Gutierrez was brought on to direct. Luke Evans was cast in the title role, and it was also reported that James O’Barr signed on as a creative consultant.

However, James O’Barr told Comicbook.com that he has not signed a contract yet. O’Barr also indicated to us that he wants an executive producer role, and if he doesn’t get it, then he could walk away from the project. James O’Barr even gave us a brief outline of the type of Crow movie that he and the director want to make, which really got us excited for what sounds like exactly the movie that fans would want to see.

“It’s supposed to start filming in January. Luke Evans is the star. Everything is still kind of up in the air, because I haven’t signed any kind of contractual…it’s between agents and lawyers right now. They want to hire me as a creative consultant. I want to be an executive producer to know that my suggestions have weight. If they don’t want to give me that, I’ll just walk away from it. And the director said he would as well. He said, ‘If I wasn’t involved, he’ll walk away from it,’” said James O’Barr.

James O’Barr explained, “I want input on all the casting. I want control of the soundtrack. Whatever it takes to make it a good movie, I want to be a part of. And the director, he’s right next to me. He’s like, ‘If James isn’t involved, then I don’t want to be involved either.’ But it’s supposed to start filming in January, so they’ll have to get all that lined up pretty quickly.”

As far as the film itself, James O’Barr said, “And the important thing for this to stress is that it’s not a remake of the Brandon Lee film. We’re going back to the book, and we’re going to do like a straight adaptation of the book. So it really has nothing to do with the Brandon Lee film, other than they are based on the same source material. So it’s like the Bela Lugosi Dracula versus the Francis Ford Coppola Dracula, two entirely different films, just the same source material.”

In regards to when the film will be released, James O’Barr said, “Well, it won’t be until the following year, six months of filming and pre-production and all the post-production stuff. And I’ve talked to a bunch of bands that I really like and admire, and they’ve all agreed to do new songs for it if I’m involved. I’m talking with Trent Reznor about doing the soundtrack for it. It could be a really, really exceptional film if they let us make the movie we want to make.”

James O’Barr explained, “Initially, I think they were trying for the Twilight crowd, and I said, ‘If you want to go for a PG-13 film that’s geared toward 14 year olds, I’m going to leave right now.’ I said, ‘The crowd you should be going for is the Girl With The Dragon Tattoo crowd.’ And I think a little light bulb went off over their heads when I said that. If all things go according to plan, which they rarely do, it will be like a really…almost like an art house film, one part kind of David Lynch Eraserhead strange stuff, black-and-white, his nightmares; and then like one third in this really bright Technicolor from when Eric and Shelly were happy; and the last third would be very much in the Taxi Driver vein with just really ugly, brutal violence, so not stylized violence like the Brandon Lee film. As close to reality as we can make it, just very gritty, ugly, nasty violence.”

“But like I said, conditions have to be met before I will throw myself into it 110%. As of right now, nothing has been signed. If they are going to make this a successful film, they kind of need me attached to it at this point, because they made such a horrible mess out of it with all the sequels. And all the bad choices they’ve made over the last two years with casting and directors, I mean Jason Statham and Marky Mark and Bradley Cooper as the Crow. It’s just like, ‘What were they thinking?’ I’m just mystified. And the guy they have signed now, Luke Evans, he’s a British guy. He’s been in dozens and dozens of movies, but this will be I think his first starring role. He’s very intense, very striking features. He’s very physical. In fact, he’s the bad guy in the new Fast & Furious movie, so if people want to check him out. But as of right now, that’s where it stands. Everything’s kind of up in the air, but they’ve got a January start date, so they need to get all of that stuff in order soon if they want my involvement,” said James O’Barr.

The Crow Reboot: James O’Barr Wants Executive Producer Role Or He Could Walk