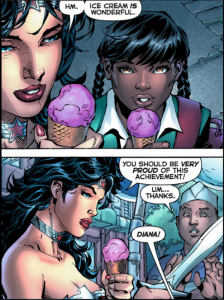 Audition scenes written for actresses testing to play Wonder Woman in The CW Network's upcoming series Amazon have been leaked on the Internet. The series, which follows the antics of "Iris" (which has now been said to be a placeholder name) from the island of the Amazons back to Man's World where she'll become Wonder Woman, has been compared to previous CW/DC Entertainment partnerships Smallville and Arrow. A pilot is currently being written by Allen Heinberg, a TV writer who has worked on Wonder Woman comics in the past. Wonder Woman TV got their hands on the audition scenes, which feature Wonder Woman's character interacting with Steve Trevor, the U.S. Military pilot who crash-lands on her island and ultimately brings her back to Man's World with him. Here's how they've described the pages they saw...

In the first scene — which may or may not be part of the actual pilot, should it even be filmed… Steve Trevor has landed, and his hands and feet are cuffed by a chair as Diana tries to figure out his intentions. She notices he has a weapon, and accuses him of being a terrorist, or even a diversion or harbinger of an invasion of men. In another scene, Diana and Steve are at a diner, we assume in Man's World, and are a lot more friendly. There, Diana has her first taste of ice cream, in a very cute sequence.

The ice cream scene has already drawn some attention since there was a "slumber party" sequence in which ice cream figured in the failed 2011 Wonder Woman pilot starring Adrienne Palicki. It's also, as seen above, a recurring theme in DC's New 52 handling of the character; the scene above was written by Geoff Johns and drawn by Jim Lee in Justice League #3, and also depicts Diana of Themysciara in her first encounter with ice cream. If they use Gorilla Grodd in this series, but rename him to Chunky Monkey, that's where I draw the line.