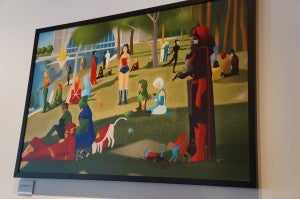 Yesterday, Warner Brothers debuted The Dark Knight Exhibit in Los Angeles to a group of reporters including our own Emily Donn, who sent us a bunch of interviews and other material that we'll be sharing over the next day or so.

All of the Batmobiles will be at L.A. Live's Event Deck now through December 14 as part of an exhibit celebrating the release Tuesday of The Dark Knight Rises on DVD and Blu-ray. Admission to the exhibit is free to the public, so if our West Coast readers want to attend and the information is below. The exhibit hours are Monday through Sunday, noon until 9 p.m.

The Dark Knight Legend Exhibit at L.A. LIVE’s Event Deck will bring together costumes and props from films in the Dark Knight Trilogy as well as all seven Batmobiles spanning the television and film franchise of Batman beginning with the Adam West television series in 1966 to the Tumbler and Bat-Pod from The Dark Knight Rises.

Also included will be a selection of Batman art from the DC Comic art exhibit Darkness and Light, which has made stops in New York City, San Diego Portland and Atlanta and includes a centerpiece by legendary artist and DC Entertainment co-publisher Jim Lee. Fans can access L.A. LIVE’s Event Deck (directly behind Nokia Theatre L.A. LIVE) from the stairways at the corner of Chick Hearn Ct. and Georgia St. or at the entrance at West Road and Georgia St. (1 block South of Olympic Blvd).

Look for more from the exhibit as we can prep it!

The Dark Knight Exhibit: A Preview