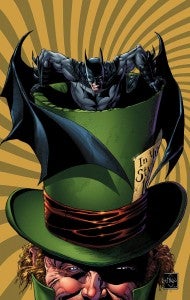 Ethan Van Sciver, most recently the artist on the Green Lantern Annual #1 for his frequent collaborator Geoff Johns, will take on the regular art chores for the Gregg Hurwitz-written Batman: The Dark Knight with January's #16, according to DC Comics.

The artist, arguably best known for his work on Green Lantern: Rebirth and The Flash: Rebirth, will take over from the departing David Finch, who will join Johns on Justice League of America.

“With Scarecrow, a lot has already been said about who is he, but not a lot has been said about the villain we've chosen: the Mad Hatter,” Van Sciver told CBR. “It really is going to be a revelation to a lot of Batman fans who have seen this villain around for a long time but haven't given as much thought as to what makes him tick. We're inventing a lot of things as we go along with it.”

Van Sciver's comment--"the villain we've chosen"--makes it sound a bit like he may only be aboard for an arc, although since the launch of the New 52 that's more the norm than the exception for many titles.