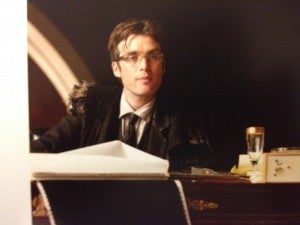 Cillian Murphy, who starred as Dr. Jonathan Crane (better known as The Scarecrow) in Christopher Nolan's Dark Knight Trilogy, will appear as the lead in a new mobster series being produced for BBC Two. The six-part Peaky Blinders will reportedly be a "gangster family saga" from Steven Knight, who also wrote Eastern Promises for David Cronenberg, who directed the comic book gangster movie A History of Violence.

According to Deadline, "the series is set in 1919 Birmingham where Tommy’s family rules the lawless post-war slum neighborhoods as returning soldiers, revolutionaries and criminals fight for survival." Murphy, who plays family patriarch Tommy, finds his leadership challenged when an aggressive new police chief begins to make inroads into the family's operations.

The series will go into development next month, with an eye toward a 2013 release to television.