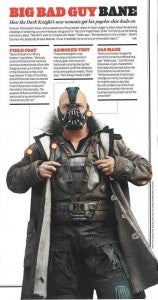 In an interview with Rolling Stone this week (not available online and scanned by Comic Book Movie), director Christopher Nolan spent some time explaining the thinking behind the controversial look of Bane, the villain behind his third and final Bat-flick, The Dark Knight Rises. It's clear that he's put a lot of thought into it and that, whether fans agree or disagree with his reasoning there's at least some thought behind it that transcends "this will look cool on film."

The director talked about Bane's military style of dress ("He leads a band of fanatical mercenaries who have done all kinds of horrible things and end up in Gotham.") and the apparent connections to the Occupy movement ("One of the influences on the script was Dickens' 'A Tale of Two Cities,' and with this overcoat we wanted to infuse the romanticism of the French Revolution mixed with World War II functionality."), both of which touch on points that the hardcore fans already knew.

But what struck us is the phrase "He's always ready to fight," used to explain away that armored harness-vest. He could just as easily be describing Batman.

Isn't that the whole point of Batman's utility belt, after all? He's meant to have something to help him out of every situation like some crazed, pointy-eared boy scout. That's why he can survive a stare-down with supervillains who have powers and super-weapons; it's his equalizer.

And now Nolan has him facing off against a villain who's got the same mindset.

The Dark Knight Rises opens in the U.S. on July 20.

The Dark Knight Rises' Bane is the Anti-Batman