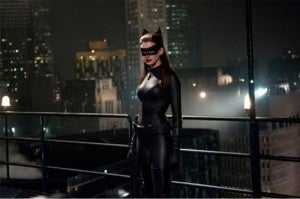 While Christopher Nolan might be done with his Dark Knight trilogy, his cast members are having a much more difficult time breaking up with the franchise. For the second time in recent memory, The Dark Knight Rises’ Anne Hathaway has gone on record expressing her interest in a Catwoman spinoff.

In an interview with the BBC, Simon Mayo asked Anne Hathaway about her interest in a Catwoman spinoff. Anne Hathaway said, “There would always be interest in that wonderful character who I love so much that in a recent kind of like Q& A where I had to get up and talk about it somebody asked me what it was like to say goodbye to her and I burst into tears. Which is just about the most un-Selina Kyle thing that you can do.”

Despite the tears, it doesn’t look like there is any movement on a Catwoman spinoff. Anne Hathaway added, “And if there’s a spinoff, nobody’s talked to me about it. I am a big fan of the idea, but there’s nothing actually happening. It just kind of exists in my imagination.”