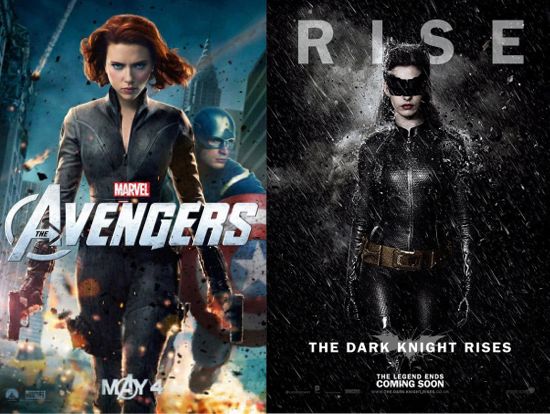 5. Vicious Villains – While quite different in appearance, both Bane and Loki had the same dark and menacing tone as villains. Both Bane and Loki were the type that seemed to ooze pure evil, where they would and did kill without a second thought. The way that they both carried themselves with a quiet confidence in certain scenes also seemed similar, such as Loki waltzing into the museum gala in Germany and Bane entering the stock exchange building in Gotham City.

4. Cities Under Attack – Both The Dark Knight Rises and The Avengers showed cities under siege. In The Dark Knight Rises, Bane and his henchman destroyed part of a football stadium and collapsed bridges leading into Gotham City. In The Avengers, the Chitauri leveled buildings and blew up cars and buses as they attacked New York City. Both Gotham City and New York City are thrown into a state of chaos and essentially cut off from the outside world.

3. Women In Black – Probably the most obvious comparison between The Dark Knight Rises and The Avengers is that the most prominent female character in both movies dressed in a skin-tight black costume. But the similarities go far beyond just how Catwoman and Black Widow dress. Both Catwoman and Black Widow have somewhat sketchy pasts, but they ultimately proved themselves to be heroes.

1. Restaurant Ending – There is a lot of intense action and destruction in both The Dark Knight Rises and The Avengers, but one of the final scenes in both movies involves a rather calm restaurant scene. At the end of The Dark Knight Rises, Bruce Wayne and Selina Kyle are shown dining at a café in Italy. After the credits in The Avengers, the entire team is shown enjoying some shawarma. Both scenes offer that reassurance to the audience that despite everything that has happened that it’s all going to be ok.

The Dark Knight Rises: Fives Ways It’s Like The Avengers