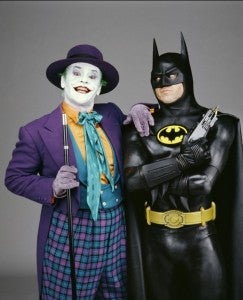 While The Dark Knight remains the undisputed king of the Batman box office with 74 million tickets sold, BadAss Digest writer Brian  Collins crunched some numbers and came away with some interesting information yesterday: The Dark Knight Rises, currently being compared to The Dark Knight on every entertainment news site on the Internet, has actually sold 12 million fewer tickets--than Batman, the 1989 Tim Burton film that marks the dawn of the modern era of the Caped Crusader's film career.

According to Collins' estimates (which use Box Office Mojo's records to calculate number of tickets sold by using the average ticket price and dividing that by the revenue generated), Batman sold an estimated 62,954,600 tickets in 1989 at an average price of $3.97. The Dark Knight Rises has sold 50,635,700 tickets so far, with an average price of $8.02 per ticket. That's about 12 million fewer than Batman, with  projections putting it on pace to sell about 2 million more before it leaves theaters, closing the gap to about ten million.

For comparison's sake, it's worth noting that The Dark Knight sold 74 million tickets, and Marvel's The Avengers around 76 million. Using a similar method, we determined that Superman: The Movie, often discussed as the first major comic book blockbuster, sold around 57 million tickets.

As is common at Box Office Mojo, these are taking the domestic box office into account.

The Dark Knight Rises Has Sold Fewer Tickets Than Batman