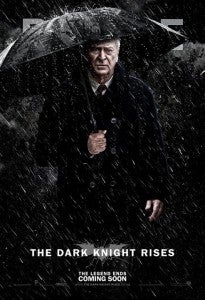 In an interview with The Huffington Post in advance of tomorrow's release of The Dark Knight Rises on Blu-ray, DVD and digital download, Michael Caine said that he doesn't really worry about being nominated for the Academy Award, but that as an Academy member himself, he'll vote for himself.

"You don't think about getting nominated. They either do it or you don't. There's nothing you could do," Caine said. He joked, "I'm looking for people I could pay off, but I can't find any. [Laughs] So you just wait. It's like I said with Hannah and Her Sisters, that's really out of the blue. At least people have seen The Dark Knight Rises. So it would be there with a chance, but there's nothing you can do about it. You just leave it in the lap of the members. I'm one of the members, so I'm voting for me. I'll tell you that."

The actor also talked about how much he enjoyed his role as Alfred Pennyworth in the Dark Knight Trilogy, saying that he came in with low expectations--thinking that a role as a butler is just a role as a butler--but that it turned out to be very rewarding.

"A lot of critics reviewed The Dark Knight Rises as a very good adventure film and completely ignored all the other stuff that's going on, which is an incredibly high standard. For starters, Batman has won an Oscar. And the butler's won two! Gary Oldman was nominated last year. Very often with these big blockbuster stunt films, they haven't got the money to employ really experienced actors. They just write cipher parts that anyone can play. Very unemotional. Especially my lot in the last one. Blimey. It's one of the most emotional parts I've ever played."

The actor also said that he "was so happy with the ending, obviously," praising Nolan's writing in the third and final film.

"It was just an ordinary day. 'You do this, you walk in, have a look around.' He said, 'I just want you to nod, nothing else.' Because earlier I said to Bruce, 'I want to see you with a wife and children and all that,'" Caine explained. "I said I won't saying, I'll just nod my head. I said that earlier in the movie and that's exactly what I did at the end. I thought the ending was wonderful.

"It's the writing, you know. The thing about Chris is that he's not only a brilliant director. I think he's up there with David Lean, but David Lean couldn't write. He used Robert Bolt to write his scripts."