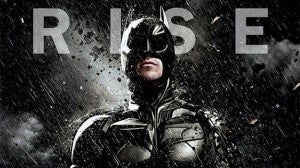 After a week of hyping new footage from The Dark Knight Rises during tonight's MTV Movie Awards broadcast, the network has debuted a new 30-second TV spot, focusing primarily on the supporting characters and including a few nice, clear shots of The Bat, the new flying vehicle Batman uses in the film.

"Let me show you some things anyway," Lucius Fox tells Bruce Wayne who, leaning on a cane, tells his old friend that he's retired. Moments later, viewers are seeing a close-up shot of The Bat taking off into the air in the midst of a chaotic midtown scene.

There's also a fair amount of Catwoman in the film (including reusing the footage of her stealing Bruce Wayne's car) and a brief explanation of who Bane is and where he came from, as told by Alfred. How Alfred would know that is a mystery for another day, we suppose...!

Check out the trailer below, and if any more footage surfaces on MTV tonight, we'll be sure to have it for you as soon as we can.