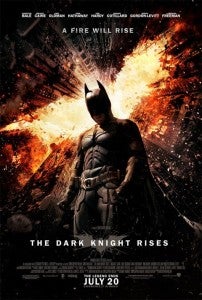 Last night's midnight screenings of The Dark Knight Rises, Christopher Nolan's final film in his trilogy of Batman movies, brought in a whopping $30.6 million, making it the second-highest tally ever for a midnight release, after the massive $43.5 million brought in by Harry Potter and the Deathly Hallows, Part 2 back in 2011.

The Avengers, which made a record-shattering $207 million in its opening weekend, made less than $20 million at its midnight screenings back in May. The Dark Knight Rises has long been perceived as the only serious threat to The Avengers' summer box office dominance, with projections for this weekend ranging from $175 million to $217 million for the Bat-sequel. What impact, if any, last night's tragic shooting in Colorado will have on the film's box office total remains to be seen.

Warner Brothers, while announcing the results of last night's box office, also confirmed that they will not cancel screenings of the film around the country, as had been previously rumored, although they have cancelled the Paris premiere of the movie and a number of media appearances by the cast and crew.

Just the $30 million the movie pulled in last night would be enough to make The Dark Knight Rises the weekend's #1 film, if projections by Box Office Mojo are any indication. The site expected Nolan's finale to break The Avengers' record and easily take the week's box office crown. The site, which generally shuts down for the weekend and updates infrequently after their initial projections come out, do not appear to be updating their projections for the weekend in light of last night's shooting.

The Dark Knight Rises Takes in $30.6 Million at Midnight Screenings