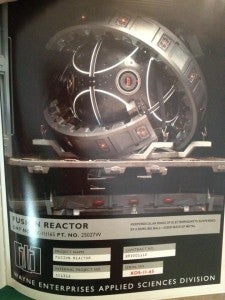 So THAT'S where he gets all those wonderful toys!

In a recent reveal on the Dew Gotham City viral page, the good folks at Mountain Dew and Warner Brothers revealed that one of the mysterious pieces of technology seen in a number of Dark Knight Rises photos is, as some had suspected, a fusion reactor meant to make Wayne Enterprises a beacon of self-sustaining energy.

That's right, folks--the heavily-guarded MacGuffin at the heart of Bane's plan to conquer and destroy Gotham City is essentially the same thing Loki just used to power his gate to the Chitauri in Marvel's big May comic book movie! It also explains why Batman needs an EMP cannon at one point--presumably in the hopes of shutting it down or mitigating its effects when Bane turns it toward evil. Too bad for Wayne Enterprises that the promotional material they provided to the Gotham Observer gave away so much information about how they were securing the device!

"The reactor is kept below Wayne Enterprises recycling plant located on the Gotham River. In the event of a security breach or, in a worst-case scenario, a meltdown, the reactor can be flooded and cooled down before it reaches a critical point. Tubing and shaft-ways lead directly to the device and can funnel river water into the reactor's core were its temperature to reach critical levels. Entry into the reactor is marked by a tamper-proof fingerprint identifier to prevent infiltration."

The fusion reactor has been seen at least once or twice in Bane's possession and is presumed to be the so-called "earthquake machine" that collapses the stadium during a football game.

The site also revealed that both the fusion reactor and The Bat, Batman's new flying machine, was also developed by Wayne Enterprises, under the authority of Lucius Fox and ostensibly for use by the U.S. military. Like the tumbler, though, the military deemed it impractical for their needs and it returned to the Applied Sciences Division to wait for a use.

Which, of course, we've seen a few times. "It does come in black."

The Dark Knight Rises vs. The Avengers: The Technology War