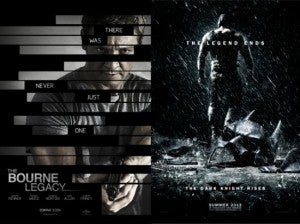 In the lowest-grossing August at the domestic box office since 2006, The Dark Knight Rises came out the most money-making movie of the month based mostly on the strong head of steam it had built up at the end of July. The month was down 10% from the same time last year.

The film took in $122.7 million in August, according to Box Office Mojo, which accounted for nearly 15% of the total box office, which made just over $800 million all month long. The Bourne Legacy, which came out early in the month, came in second with $90.8 million, meaning that the two top-grossing movies made upwards of 20% of the total monthly box office.

It was a pretty low-grossing summer in general, with Marvel's The Avengers, The Amazing Spider-Man and The Dark Knight Rises the only real bright spots (if you consider The Hunger Games a pre-summer movie, which the industry does), and the already-anemic moviegoing audience shrunk even further after the cinema shootings in Aurora, Colorado, when around 20% of potential moviegoers polled told Nielsen that they would hesitate to go back to movie theaters.

The rest of August's top ten were post-Dark Knight releases, with The Campaign, The Expendables 2, Total Recall, Hope Springs, Diary of a Wimpy Kid: Dog Days, Paranorman and The Odd Life of Timothy Green taking spots on the list. The Expendables 2 is arguably the most significant name on that list, given its late release date and the fact that it almost certainly would have overtaken The Campaign, an underwhelming Will Ferrell vehicle, if it had come out a week earlier.

The big story of the month was probably that none of the sequels and remakes released recently managed to equal the box office take of the movies that came before them, with The Dark Knight Rises falling short of The Dark Knight while neither The Bourne Legacy nor The Expendables 2 managing to catch up to their predecessors, either.

Arguably the worst of a bad lot was Total Recall, which made less than half of what the Paul Verhoeven original did...in spite of 1991's ticket prices being just slightly more than half of what they are now. Adjusted for inflation, the first Total Recall would have made around $225 million, compared to just $57 million for the Colin Farrell remake.