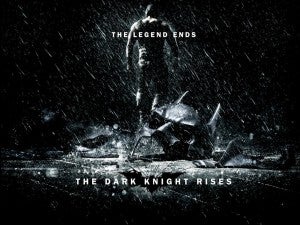 We've talked before about an apparent trend in Christopher Nolan's third and final Batman film, The Dark Knight Rises, that sees the picture taking a lot of cues from Batman Begins both plotwise and stylistically. Apparently, another one of those similarities has been revealed via the Dew Gotham City viral site maintained by Mountain Dew.

Mark Hughes, Forbes' resident Bat-expert, has another speculative blog post out, this time putting together information gleaned from the Dew Gotham City site along with footage seen in trailers and TV spots to form what seems to him a likely narrative for the first act of The Dark Knight Rises. I'm not certain I agree with his conclusions, but certainly while he's showing his work a number of things occur to me.

The most notable thing that's come to light in the last day or two is a letter written by Lucius Fox to Bruce Wayne, who apparently has sequestered himself at home and is not taking visitors. It's unclear whether this happens before the movie begins or during the earliy part of the film, but Bruce has apparently been AWOL from Wayne Enterprises for some time and that, coupled with a massive R&D budget being run up for an unspecified "energy project," is beginning to make the board of directors quite uncomfortable.

While "energy project" probably brings to mind Tony Stark and his arc reactor or some other Avengers-like approach to the idea, it seems worth noting that Batman has been spotted in a number of trailers carrying a handheld cannon that has been identified in toy and children's book tie-ins as an EMP generator. That might well explain at least some of what the energy project is going for, although it's more likely an offshoot of a larger project that remains mysterious.

Forbes speculates that this letter may have been written during the earliest part of the movie, where Bruce is still recovering from injuries sustained during The Dark Knight and that accounts for his disheveled appearance, the cane and other odd affectations we've seen from the onetime Dark Knight in trailers.

Regardless of when the letter was written, it seems more likely to me that Bruce's appearance issues will have more to do with a first-act confrontation with Bane (a la Knightfall) than anything else. If Bruce is just depressed and in isolation after taking the fall for Harvey Dent's death or whether it comes later and Hughes is right that this letter finds him during his post-injury seclusion, it could easily provide an excuse for Bane being able to beat him the first time out, as Batman will be out of practice and out of shape, not entirely unlike Rocky Balboa at the beginning of Rocky III.

At any rate, The Dark Knight Rises hits theaters on July 20 and we should know around that time.