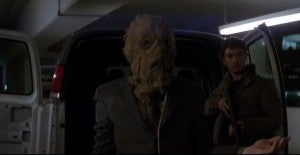 In an interview at Empire Magazine promoting his new film Red Lights, actor Cillian Murphy (who played Dr. Jonathan "Scarecrow" Crane in Batman Begins and The Dark Knight) evaded a question designed to trap him into confirming or denying involvement with The Dark Knight Rises, director Christopher Nolan's third and final film in the franchise, which hits theaters next month.

Asked how it feels to be a fan of the films and finally not be in one, Murphy neither confirms nor denies that implication, leading some fans to speculate that he may have a cameo after all while Comic Book Movie proclaims he's out.