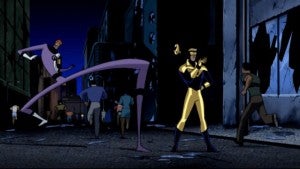 With everyone talking about Bruce Timm's departure from the DC Universe animated features and his potential future at the company, it seems as good a time as any for Warner Bros. to put some of Timm's work on Netflix, right? Well, these things happen months in advance and you can't just plan for something like that to happen just as the news drops--but it did. This morning, the popular video streaming service added Justice League, Justice League Unlimited, Batman: The Brave and the Bold and Batman Beyond to their monthly plans. The original report had suggested that Green Lantern: The Animated Series would be coming along as well, but as of yet it has not appeared. It's possible that the status of the series of Netflix is up in the air, as a meeting to discuss the future of both Green Lantern and Young Justice is rumored to be happening on April 11.