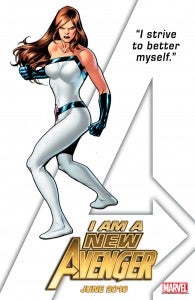 Marvel has been slowly and skillfully doling out teaser images of new teams that will debut at the conclusion of the current Siege story line and the beginning of the Heroic Age, which presumes a dramatic end to a Marvel universe controlled by Norman Osborn for the better part of a year and a half now. Following on the heels of their unveiling of the first five members of their new Avengers team comes the New Avengers. We showed you last week that Luke Cage was one of the members revealed on this team, and now we're here to show you the other four that have been revealed at this time! Set to join Luke, not surprisingly, is his wife Jessica Jones. What might be a bit more surprising is her apparent flagship role in the series, which is sure to continued the increased profile she's been experiencing of late in New Avengers, the current, and soon to be concluded, series.

One of the founding members of the Fantastic Four, The Thing, is a bit of a surprise addition to this team. While it appears that he is still a member of the FF, based on the outfit we should say, perhaps a temporary replacement on that team isn't out of the question. It's certainly happened before, and he's been replaced with noted guests such as She-Hulk at one point or another. His addition to the team, along with Jones and Cage, certainly ensures that this team will NOT lack for powerhouse forces to be reckoned with! Rounding out this first wave of team members are two familiar faces, Wolverine and Spider-Man, who both became cornerstones of the original formation of the New Avengers several years ago. Based on these early reveals, each team appears to have its own unique stamp and flavor for a new era, age and direction in story for the Marvel universe!