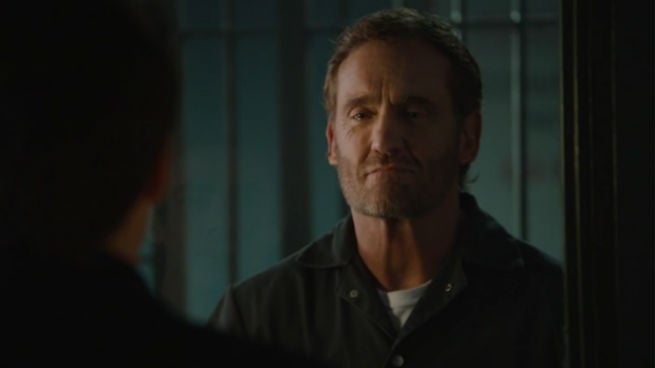 The episode opens on a spiraling shot of a family trapped in a car, whcih is overturned with a live wire nearby. The Flash rushes to their aid, passing by a group of firemen and vibrating the car doors until they come loose, then rushing the family out. It briefly appears as though a kid is trapped in the car, but The Flash has saved them at super-speed.

Back at S.T.A.R., they discuss Barry's training, and that his speed keeps increasing. Barry leaves to go have movie night with Joe rather than going out with Cisco and Caitlin for drinks. Caitlin has found Cisco's tablet, where he's researching F.I.R.E.S.T.O.R.M. She chastises Cisco for continuing to pursue it, saying it's time for her to move on, but Cisco says she hasn't actually done so.

Outside of Iron Heights, a woman scouts the place out, then teleports inside, avoiding guards and crashing security cameras as she goes. She arrives at a cell, then teleports herself inside; she tells the inmate to grab her hand and then teleports them into the getaway car. The two kiss, then escape.

Elsewhere in the prison, later, Barry Allen has found organic particulates; it's a trail that leads outside. Joe brings Henry to see him, and Henry says that the prisoners wouldn't talk about it with cops even if they knew. He has faith in Barry, and is led away.

At her apartment later, the girl and her boyfriend are discussing her powers, which she hasn't connected with the particle accelerator. She tells him that she'd been having random power issues for a while, but that she got him as soon as she knew how to use it. She wants to run, leave town and run off together. He says they can't until they use her powers to get his debts paid off.

At S.T.A.R., they analyze the particulates, finding DNA in them. They trace it to Lashawn Baez. Barry and Joe leave.

In the holding cell below the labs, Cisco goes to Piper to ask him about Ronnie; Professor Stein was in S.T.A.R. Labs the night of the explosion and he wants to know why. Piper tells him that the mystery isn't why Stein went to S.T.A.R. Labs, but why he didn't leave. He says he can't tell him and has to show hiim, but Cisco says he won't let Piper out. Piper tells him that he knows how important Cisco's S.T.A.R. family is to him and that eventually he'll help him out of the cell to help his family.

At Jitters, Barry tells Iris about his time at the prison. Iris tells him that she's having trouble at work because she's worried about getting fired if she can't find a great story. Barry says he'll help her find something.

At S.T.A.R., Cisco tells Piper that if he's going to let him out, he isn't taking any chances, and brings a pair of high-tech bonds.

At the prison, Barry and Joe are visiting Henry, who tells them about Clay Parker, the escapee, and his troubles owing money to drug dealers.

At S.T.A.R., Piper shows Cisco a "bomb shadow" he says belonged to Dr. Stein. He tries to run away and Cisco incapacitates him with a sonic weapon. He says that he'll tell Cisco where Ronnie is, but he has to take off the bonds, as they'll be conpicuous where they go next.

At the lab, Barry and Caitlin lament having no social lives, when a call comes in: Parker and Baez are at work. Barry runs to stop them as The Flash and after a brief confrontation with Baez, he's momentarily incapacitated bya  gunshot and she grabs Parker and teleports away.

At S.T.A.R., Barry tells them that she can teleport; Caitlin names her Peek-A-Boo and S.T.A.R. set about trying to think of a way to stop her. Barry leaves to go help Iris with her story, but she's going out to have dinner with Eddie and his mom. Barry calls Caitlin to ask what bars the villains used to go to, and the pair decide to go out to a few bars to watch for them. They end up at a karaoke bar, where Barry is impressed by how Caitlin looks. She suggests that they should both look for the bad guys and try and find dates.

Caitlin knocks back a couple of shots and starts a tab.

In an office, Cisco and Piper are watching security tape of the night of the explosion. They figure out that dark matter had merged Dr. Stein with Ronnie. As Cisco is distracted by the footage, Piper attacks him using a sonic attack from his hearing aid and runs.

At the bar, Caitlin is drunk and calls Barry to the stage for a duet. Afterwards, when she excuses herself to go to the bathroom, Barry meets Linda Park, who was really impressed by his singing. She gives him her phone number, and goes.

Caitlin comes back out of the bathroom, saying she needs to go home.

At the drug dealer's hideout, Peek-A-Boo and Parker go to pay off his debt, but the dealer tries to shoot Baez. When she teleports behind him, he says he wants them to go into business with him. Before they can make a decision, the cops come in and a gunfight erupts, injuring Parker. Baez teleports away with him.

Barry drops Caitlin off at home, where she asks if he's going to call Linda. She says he won't, and asks him for help getting undressed. He undresses and redresses her at super speed. She asks him to stay with her until she falls asleep, which he does.

The next morning, she's hungover when she gets to S.T.A.R. Barry checks to see if she's okay, and she says she doesn't remember much from last night.Barry heads into the lab, where Cisco and Wells tell him that he let Piper get away. He admits that he has been obsessing over Ronnie because of his guilt over sealing him in. Caitlin tells him that he shouldn't. They get to the business of finding Baez and Parker; Wells has figured out that Baez can't use her powers if she can't see. Before they can do anything about this, Barry gets a call: his dad has been stabbed in prison.

Joe and Barry arrive at Iron Heights, where he admits that he was looking for information for Joe and got beat up by the drug dealer's people on the inside. Barry is upset that he was kept out of the loop but Henry tells him that he wants to feel useful. Barry asks who beat him up, and Henry sells out a man named Julius. Barry suits up at super speed later and drags the man out of the prison, telling him that he will let the guards find the man "escaping" if he doesn't tell him the details of the dealer's next big job. He sells out the dealer and Flash takes off, leaving him to be found and penalizied for the escape attempt.

On the outside, Flash finds Parker and Baez, and after a brief, powers-fueled fight with Baez, she teleports into the getaway car. As they're driving through a tunnel, Barry takes a wrench and breaks all the lights in the tunnel and her car, forcing her into darkness. Parker runs for it, leaving her stranded there. When they put her into the pipeline, they have mirrored glass on the inside, so she can't teleport out. She admits that she still loves Clay in spite of everything.

Barry and Caitlin talk about last night, agreeing to move on from their exes. The Flash finds Iris on the street, leaving her a report about Clay Parker's breakout. She snaps a picture of The Flash as he leaves.

At the Picture News later, Barry shows up to meet Linda, who works with Iris. He takes her off to lunch and Iris seems confused. After, Barry visits Henry in prison. Henry shows Barry a newspaper with The Flash on the cover, saying that he saw him once, watched him save Joe's life. He tells Barry that he heard The Flash also messed with Julian. He looks at Barry expectantly, and Barry laughs off the idea that he could be The Flash, but Henry tells him that if The Flash were his son, he'd tell him to be careful, that he's a hero and that he's proud of him. Barry is choked up, and smiles.

In the sewers, two utility workers stumble across an area where the word "Grodd" is scrawled over and over again all over the walls. A gorilla grabs and beats them.

The Flash: Crazy For You Recap With Spoilers