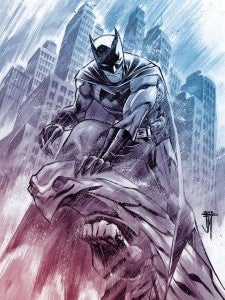 This spring, The Flash creative team of Brian Buccellatto and Francis J. Manapul will take over Detective Comics from the departing John Layman and Jason Fabok, giving Batman a new look and a new direction  for his 75th anniversary.

The pair shared their thoughts on the character with USA Today, not least of all was that they look forward to doing a somewhat darker character now that years on books like Superboy and The Flash have built up an expectation on the part of the fans that they will bring lighter fare to the table.

“We want to bring him closer to his roots and be more of a street-level type of hero,” Manapul said about his and Buccellato’s plans for the Dark Knight. “His superheroics will still be present, but the investigative part of Batman will be at the forefront …We've always written stories about hope, and it will be very interesting to see what comes out when we walk through the sullen streets of Gotham City.”

“Stylistically, we will use the tools in our toolbox to capture what we think the Bat-universe looks and feels like,” added Buccellato. “Gotham won't look like Central City, so you won't be seeing all the bright reds, oranges and yellows that defined Flash's world.”

No specific start date is given for their run on Detective Comics, although DC does say that the storyline wrapping in Detective #27 (January 8) will be the last one for the old creative team, so February is as good a guess as anyone's until more information comes out this weekend at New York Comic Con.

The Flash Creative Team to Take Over Detective Comics