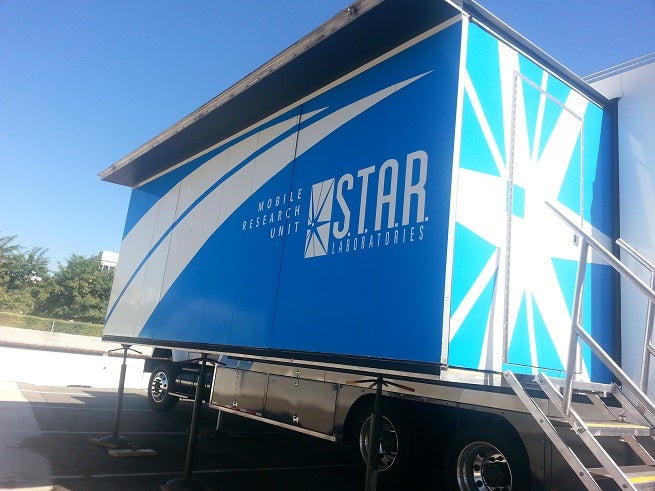 In a bit of clever marketing for The CW's The Flash, which premieres tonight, there has been a van driving around Los Angeles that advertises itself as a mobile testing unit for S.T.A.R. Labs. The S.T.A.R. Labs van has been allowing people in for “testing,” in order to find other metahumans.

Really, the van is filled with games and challenges designed to test one thing. Your speed.

Upon walking in, I was immediately drawn to a game that reminded me somewhat of the Simon, the memory game from my childhood. While both games require the player to watch lights and push corresponding buttons, this one was a race. Check out the video below to see how I did.

Next to that game are 6 screens, each one with a number at the top and words flashing by at various speeds. That challenge is designed to test your reading speed. The goal is to simply see which is the fastest moving screen where you can read enough words to understand the whole story being presented. Take a look below.

The game I played the most tested how many times you could hit the same button in a specific time frame. My best score put me in the 85th percentile on my very first try, a feat I could not manage again, though I did eventually get back above 80% after a short break. It is a bit hard on your hand and wrist, I do recommend a break if you want to attempt to beat your old score.

Not everything in the van is a game per say. There is a display of how a dripping faucet might look to Barry moving at top speed. There is a test where you sit on a stool and a number of photos are taken from different angles in the space of a second, to see how much you move in very little time. There is an eye piece which flashes a small light to see how quickly your pupils dilate.

The absolute best game requires a friend. For that, I grabbed my buddy, fellow reporter Craig Byrne from Ksitetv.com. In this game, one of you stands in front of a target, and attempts to dodge, deflect, or catch foam darts shot super quick from a type of air gun, manned by the other player. How could Craig and I resist shooting each other?

After taking four shots each, I very narrowly won, with a score of 3.5 to 3. (Craig hit me three times and I deflected the fourth. I hit him all four times, but only took half a point because he caught the last dart after it hit him.)

The S.T.A.R. Labs Van was a unique gift that allowed fans to be inside the comic world. I’m glad I got the chance to visit it. If you get the chance, I highly recommend it. Just don’t forget to bring a target.

The Flash: My Trip Inside the S.T.A.R. Labs Van